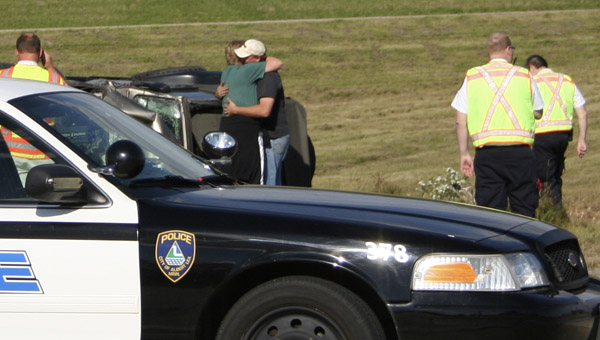 After running across U.S. Highway 65 when traffic was halted, a woman embraces a man Friday after he survived a rollover in a soft-top Jeep. -- Tim Engstrom/Albert Lea Tribune

One vehicle rolled over and two others collided at the intersection of U.S. Highway 65 and Interstate 35 Friday afternoon. No one was injured.

How the crash occurred is unknown at this time.

The vehicle that rolled over was a soft-top bronze-colored Jeep Wrangler. It was stopped on its driver’s side in the land between the ramps and U.S. Highway 65.

The other two vehicles, a red Pontiac Grand Prix and a silver Toyota Camry, appeared to have collided where the I-35 Exit 8 ramp meets U.S. Highway 65. 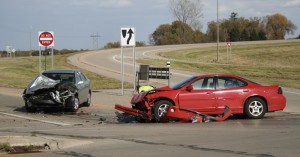 A state trooper inspects a Pontiac Grand Prix on Friday that collided at the interchange of Interstate 35 and U.S. Highway 65. -- Tim Engstrom/Albert Lea Tribune

All of the vehicles’ occupants were out and communicating with authorities.

The Albert Lea Police Department, Freeborn County Sheriff’s Office and the Minnesota State Patrol were on the scene.

Look to www.albertleatribune.com for more information as it becomes available.