The Albert Lea Art Center is inviting the community to an evening for the arts at Wedgewood Cove Golf Club on Thursday, Oct. 7, from 5:30 to 7:30 p.m.

The theme of the evening is “Water Color Splash” and will showcase Beth Tostenson’s original art. There will also be a silent and live auction of more than 40 works from the art center’s permanent collection.

“It’s a good opportunity for the community to buy art,” Bev Jackson Cotter, member of the Art Center, said.

Music will be provided by the popular combo Lang and Lang. The live auction will begin tentatively at 6:15 p.m. featuring artists like Lloyd Herfindahl, Stu Botten and John Lacis. The reception will include a wine tasting, hor d’oeuvres and a cash bar.

People can renew or start a membership at the event and the suggested donation for attending is $5.

“We want the community to come,” Art Center Board Member Carol Wolter said. 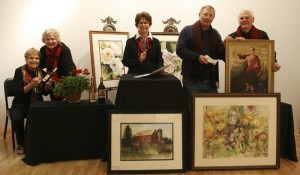 Tostenson’s work on display at the show will not be part of the silent or live auction, but will be for sale. Community members know her work because she often paints landscapes, and 25 percent of the proceeds of her art goes to the art center.

Tostenson grew up in Albert Lea. Her first experience showing art was after she had done a painting of Mitch’s Gas Station. She also painted the Broadway and Rivoli theaters, Shea’s Ice Cream Store, Gretchen Sweets and others. Current places she’s done paintings of include the Fountain Lake Gazebo, Merrill’s Popcorn Stand and Katherine Island, among others. She has more than 30 paintings.

“Many of my paintings are derived from my love of nature,” Tostenson said.

She said watercolor is her favorite medium to paint with. Tostenson also thinks it’s important to give back to the community. She has donated artwork to several fundraisers and benefits. She also teaches adults and children and is involved in the Watch Me Draw program at elementary schools.

Tostenson also does paintings from photos she receives of homes, cabins or gardens. They usually take one to two weeks. She paints houses for the American Association of University Women’s Tour of Homes, which the AAUW presents to homeowners as a thank you for showing their homes. As well as homes and landmarks, Tostenson paints florals and landscapes.

“My greatest love is sharing my paintings with others,” Tostenson said.

Three of the artists featured in the live auction are Lloyd Herfindahl, Stu Botten and John Lacis. These artists were profiled by other local artists:

Lloyd Manford Herfindahl (1922-1996) was born in Emmons and moved to Albert Lea when he was a small child. He worked free lance as an artist from 1942 to 1952 and attended the Minneapolis School of Art. He founded the Albert Lea Art Center in 1957. For the next 30 years his career as an artist brought him fame, travel and the opportunity to display his art and meet dignitaries in the United States and Europe.

Herfindahl was known for his portraits as well as social awareness themes — a farmer in despair standing in a drought-swept field during the Great Depression, three gossipy ladies drinking tea, a skid-row bum sleeping in a doorway. In his later years he painted murals — the history of medicine, service to others, a tribute to agriculture, the history of the judicial system, and the Old and New Testaments of the Bible.

In Albert Lea Herfindahl was often seen at a local restaurant visiting with friends and always wearing a light tan-colored suit and red tie, but not just any red tie. His ties were from Bergen, Norway, connecting him with his family heritage.

His paintings range from abstract to realism and can be found in collections nationwide and in Europe.

John Lacis was born in Latvia where he was trained in art at an early age. It was there that he met his future wife, Margaret. During the war they escaped to Austria and lived there in exile for a number of years before coming to Albert Lea in 1950 as displaced persons.

Lacis was employed by Universal Cooperatives and he also continued his art career. He was a prolific painter, with most of his works being from memory of his homeland in Latvia and Austria. Lacis taught art classes through Community Education, and he also taught private art lessons.

Lacis loved classical music and would listen by the hour as he painted. Most of his work was done in oil, but he also painted in acrylic and watercolor. He continued to paint until his eyesight failed him. He died in February of 2004. Lacis’ work can be found in homes throughout Albert Lea and surrounding communities.

Hyvee is sponsoring the wine tasting featuring a California wine. The labels of the wine feature artist Lu Callstrom, and can be purchased for $10. The labels can then be brought to Hyvee to receive the wine because Hyvee cannot sell wine at Wedgewood. From each label sold $2 will go to the art center. Callstrom painted a geranium, Albert Lea’s official flower, for the label.

I first met Stu Botten in the early ’70s, just after I began studying watercolor. An Albert Lean by birth, Botten has just retired. He had purchased a storefront in St. Paul and was working full time with watercolors. For several years we showed together in Albert Lea, La Crosse, Wis., Cedar Rapids, Iowa, and the Twin Cities.

We hit it off, and since we both traveled alone we often requested spaces close together for our convenience. A large man physically, his art was a reflection of himself — big, bold and colorful. He called me Mr. Tight, because of my style. I called him Mr. Slop because of his loose wet in wet approach. The truth is I never met a more creative, natural painter and colorist than Botten.

Where some artists rely on detail, contrast or light to dark, Botten just grabbed a big brush full of color and went at it. His paintings, when they went the way he wanted, are brilliant, simple and yet complex and stylized. “It’s the contrast that counts,” he would often say. His next favorite saying was “Paper is cheap, you have to mess some up to get the one you want.” I own some of Botten’s work and still ask myself, “How did he get that?”

Botten spent little time or money on presentation. He expected that most of his work would be reframed. I once heard him tell a woman that if she had the good taste to buy his work, she should have enough sense to reframe it. Botten did it his way and way better than many of the big names I see today. If you like watercolor you must love Botten’s work.

After Thursday’s event:
Tostenson’s work will be on display at the Albert Lea Art Center from Oct. 9 to Nov. 6. The art center is open Tuesday through Saturday 10 a.m. to 2 p.m.