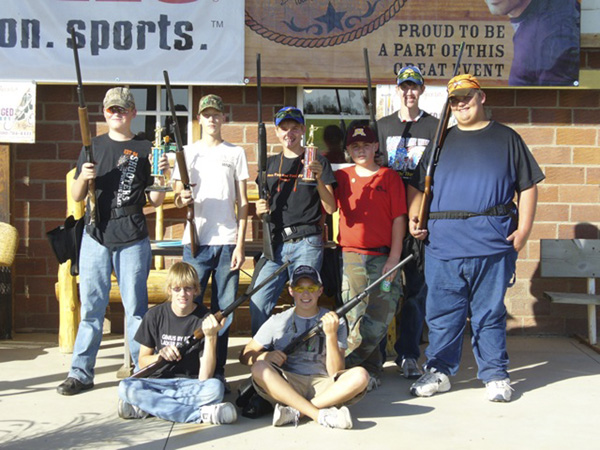 In autumn most turn their thoughts to going back to school, football and harvest. For nine members of the Alden-Conger FFA, fall means the start of competition trap shooting. Since September, the FFA members have participated in three competitions earning team and individual honors at each. 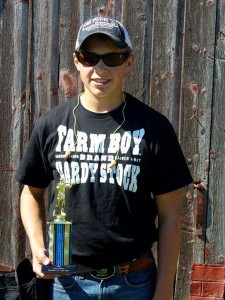 Jacob Sorenson poses with his trophy for winning the Annie Oakley competition at the Springfield Invitational on Sept. 11. -- Submitted photos

The GFW FFA Invitational was held on Saturday, Sept. 18, in Winthrop. Team one posted a 132 score to place third, and team two placed 7th with a score of 97. Tyler Koenen scored a 41 to place third individually, and Tommy Geesman was ninth with a score of 35. Five members placed in the top 10 of the skeet competition. They were Tyler Adix, Derrick Fischer, Tommy Geesman, Tyler Koenen and Derek Minear.

Due to the fall flood, the state trap shoot at Marshall was postponed until Oct. 9. The delay didn’t dampen the enthusiasm of the Alden-Conger shooters. Eight members made the journey west and competed in trap, skeet and sporting clays. At the end of the day the teams claimed two second place trophies and six spots on the all-state teams.

The day started with the skeet competition. Each chapter is allowed one team of five members. Shooting skeet for A-C was Tyler Adix, Derrick Fischer, Tommy Geesman, Tyler Koenen and Derek Minear. The team finished in second place. Tyler Koenen placed fifth and was named to the Minnesota FFA all-state skeet team. Also earning all-state spots on the skeet team were Derek Minear and Tyler Adix.

In the trap competition team one of Tyler Adix, Derrick Fischer, Tommy Geesman and Tyler Koenen finished in second place with a combined score of 171. The team score is out of a possible 200 points. Each team can have five members, but only the top four scores count. Team two of Nick Johannsen, Tyler Johannsen, Derek Minear and Jacob Sorensen posted a combined score of 123. Tyler Koenen shot his first-ever perfect round of trap and finished with a 47 to earn second place and a spot on the Minnesota FFA all-state trap team. Tommy Geesman was also named to the all-state trap team. He scored 44 and finished 10th out of 121 competitors.

The day ended with the sporting clays. Team one finished sixth and team two placed 16th. Tyler Koenen placed fourth by shooting a 40 out of 50 birds. He was named to the all-state sporting clays team.

Koenen said the trap shooting competitions are positive for the kids because they get to meet people at local gun clubs. The members give the students advice and like having younger folks around at the club. Koenen said all the FFA students improved their scores over the season.