And a sparrow in a pear tree…

“Everything is nearly copacetic. You are looking at the founder and sole member of the Crandall Preservation Society. The Society has no officers, no secret handshakes and no meetings, but we do accept donations.”

“Sounds like another harebrained, moneymaking scheme of yours,” I say.

“When it comes to going nowhere, I am on a world tour. I need money. The problem is that most money is tainted. It taint mine. Have you met the new neighbor?”

“Don’t bother. You wouldn’t like him. He came over to complain about my dog, Pyramids. I call him that because he leaves those little pyramids all over your lawn. Apparently, he has branched out and left his calling cards in the new neighbor’s yard. The neighbor asked me if I owned a red-eyed, black dog the size of Kia.”

“That’s a perfect description of Pyramids,” I add.

“I denied owning a dog. That’s my rule for getting along—deny everything. Then Pyramids started barking at a squirrel. The guy told me that he could hear a dog and accused me of lying. I kicked him off the farm. I told him that anyone who believed a dog over me was not welcome on my place.”

The bird hall of fame

To plant a seed and expect it to grow is an example of great faith.

To expect farm equipment to cooperate fully in such an endeavor is just plain foolishness.

I remember being broken down in the field one spring. That spring was a particularly hectic time — even more so than the typical spring. There was plenty of pressure. The chores had been done before we had made our way to the field. The pigs, chickens and beef cattle had been fed. The Holsteins had been milked. The weather threatened to turn nasty and chase us from our work. My father sniffed the air. He could tell when weather was changing, especially if rain was coming. I sniffed the air, too. All I could tell for sure was that I had sniffed the air. Dad said it was going to rain. We rushed to complete the repairs.

We hurried to beat the weather. Wrenches hid and knuckles bled when the recovered wrenches slipped from nuts. Tempers that had been dormant suddenly flared. It was a day sponsored by Alka-Seltzer.

In the midst of the growling, we paused to listen to the song of the vesper sparrow — one of my father’s favorite birds.

My father, who taught me to love birds, flowers, and trees, and I both found patience in the song of that fine bird.

I immediately put the vesper sparrow into my Avian Hall of Fame. The induction process was a brief one. I wished it so.

I had learned that the song of a bird isn’t just nice to hear. It is a part of us. When I hear the song of a vesper sparrow or a western meadowlark, it revives slumbering memories. The birds and their songs are me.

We fixed the problem with our farm implement. The crop was planted. The field produced a good yield. We didn’t make more money than we had ever dreamed of, but we were still rich.

We had shared the song of the vesper sparrow. 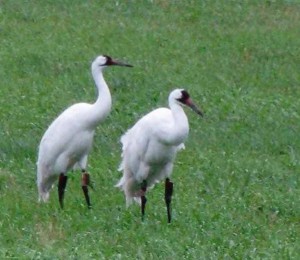 I was walking around the riverfront area in La Crosse, Wis. It was a beautiful fall day and the spot was busy with people. I stopped to admire a pear tree. A bird flew from the tree. It was not a partridge. It was a house sparrow. A sparrow in a pear tree.

“What are the tiny black insects that bite?” Often called no-see-ums, they are predators that eat spider mites, caterpillars, whiteflies, aphids, thrips, and insect eggs. Minute pirate bugs are beneficial insects that bite us in the fall. They taste us to see if we are edible.

“What is a goat prairie?” Goat prairies, also called hill or dry prairies, are found along the valley of the Upper Mississippi River in the Driftless Area. A variant of tallgrass prairie, they are found on south- to southwest-facing slopes, which receive significant winter sun. When glaciers covered most of the Upper Midwest, the powerful ice sheets bypassed the Driftless Area. These hillside prairie remnants were preserved in part because they were too steep to plow. They were grazed by livestock, hence the name, goat prairie.

“What is the favorite food of the pelican?” The American white pelican enjoys carp, suckers, crayfish, salamanders, chubs, and minnows.

Aldo Leopold wrote in The Sand County Almanac, “Our ability to perceive quality in nature begins, as in art, with the pretty. It expands through successive stages of the beautiful to values as yet uncaptured by language. The quality of cranes lies, I think, in this higher gamut, as yet beyond the reach of words.”

A crane researcher in Kenya buried 20 years of records in his yard in case his house should be burned to the ground during a revolt.

It is said that a dying crane taught Buddha compassion. Apollo, the sun god disguised himself as a crane when visiting mortals. Ancient Asians believed that the souls of the dead rode to heaven on the backs of cranes. Colonists first called cranberries crane berries and geraniums are called cranesbill because a portion of those two plants resemble cranes.

A crane is a living lawn ornament. Eleven of the fifteen crane species in the world are threatened with extinction with the whooping crane being in most peril.

If you are looking for good soup and pie (and who isn’t), please stop at Cross of Glory Lutheran Church in Hartland on November 3 from 4:30 to 7 p.m. You’ll be glad you did.

to the child as it is to the caterpillar.” — Bradley Miller.

“Always do right. This will gratify some people and astonish