Anthony Clarence “Tony” Dulas, 81, of Wells, died Saturday, Oct. 2, 2010, at Immanuel St. Joseph Hospital in Mankato. A mass of christian burial will be Wednesday at 10:30 a.m. at St. Casimir Catholic Church in Wells. Visitation will be Tuesday from 4 to 7 p.m. at Bruss-Heitner Funeral Home in Wells with a prayer service at 7 p.m. The Rosary will begin at 9:15 a.m. at the church with visitation continuing one hour prior to the service at the church on Wednesday. The Rev. Mark McNea will officiate and burial will be in St. Casimir Catholic Cemetery, Wells. Bruss-Heitner Funeral Home in Wells is assisting with arrangements. 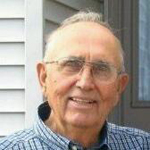 Anthony Clarence Dulas was born May 10, 1929, the son of Frank and Hedwig (Klocek) Dulas in Faribault County. On June 18, 1951, he was united in marriage to Katie Dombrowski in Wells. Tony was a member of St. Casimir Catholic Church in Wells and the Knights of Columbus. Tony was a life-long farmer who loved to garden, cook, bake and fish. He enjoyed playing all card games (Left, Center, Right), and was seen many days driving his black truck around town. He was a very social man, who enjoyed talking with people of all ages. He especially enjoyed being with his family.

He was preceded in death by his parents; brother, Roger; wife, Katie; and son-in-law, Rusty Guenther.