The funeral service for Arnold Jens Petersen, 95, of Alden was held at 10:30 a.m. today at Redeemer Lutheran Church in Alden. The Rev. Gregory Ofsdahl was officiate. Interment will be at the Alden Cemetery. Visitation was one hour prior to the service. To sign the guest book, go to www.bayviewfuneral.com. 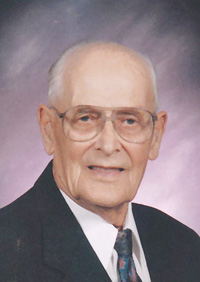 Arnold Jens Petersen was born on Nov. 22, 1914, on a farm near Newell, Iowa, to Albert and Lizzie (Bodholt) Petersen. Arnold was baptized in the Nain Lutheran Church in Newell, Iowa. His family moved to Albert Lea in 1923. In 1924 his family moved to a farm east of Alden, where he attended school at Buckeye. In 1926 they moved to a farm on the edge of Alden and attended school in Alden. At that time he was confirmed in the Lutheran faith at the Danish Lutheran Church. In 1928 his family moved northeast of Alden and Arnold graduated from Alden High School in 1931. Arnold’s occupation and love was farming. On June 23, 1935, he was united in marriage to Ardis Jorgensen at the Danish Lutheran Church. She was a devoted Christian who worked side by side with Arnold in raising their family and farming. Arnold was a member of the Danish Lutheran church where he was a past president. He was active in the Danish Brotherhood and was currently a member of Redeemer Lutheran Church in Alden.  Arnold was also a member of the Gideon’s, the Alden Lions Club and had served as a board member of the Alden Coop Elevator and the Alden School Board. Arnold was very proud that at 59 years of age he gave his life to Jesus Christ and was a faithful witness. He will be remembered for his love for the Lord and working with family, friends and neighbors.