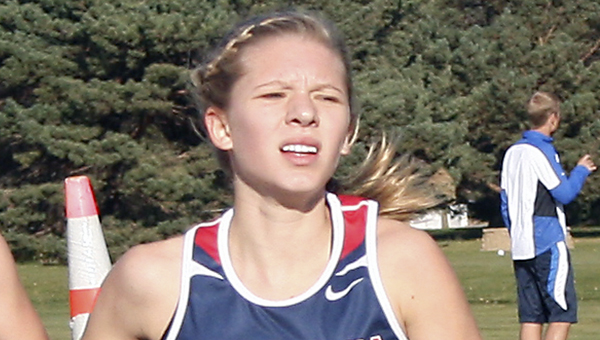 That didn’t keep her from defending her title, though, as Monson won her second consecutive Big Nine championship Tuesday at the conference meet in Owatonna.

“I am so happy for Chrissy,” Albert Lea head coach Jim Haney said. “She has dealt with a great deal of adversity this year, but she has handled her injury as a challenge.” 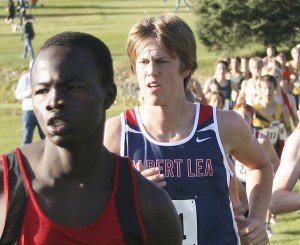 Monson paced the Tigers, finishing in 14 minutes and 56 1/2 seconds. She was followed closely by Bailey Thompson who finished fifth overall in 15:31.1.

“Thompson had a brilliant effort,” Haney said. “With a great kick at the end, she was able to pass competitors and reach her goal of fifth in the conference.”

Thompson led the Tigers while Monson rehabbed her injury. Since Monson’s return to the varsity lineup on Oct. 7, the two have been a 1-2 punch.

“(Thompson) has been a valuable addition to the team as she has taken a leadership role,” said Haney, of the sophomore. “Now she has set her sights on earning her first trip to the state meet.”

Haney says that Monson is hitting her peak and has her sights set on winning the Section 1AA meet on Oct. 28.

She should have a good chance after beating the Big Nine field by 50 yards.

“(Monson) took over the race at the 3200-meter mark and never looked back,” Haney said.

“In her second varsity meet she ran an incredible race,” Haney said, of Harms who finished in 16:12.5. “She is marvelous kid who has worked and learned how to race.”

Rounding out the top 5 for the Tigers was Riley Schultz and Rachel Kenis who finished in 32nd and 35 overall, respectively.

“Steve has been running varsity for the past six years and I am grateful for all the time and effort he has put in the program,” Haney said. “His leadership and work ethic is second to none.”

“Blair has had a great season and he has been a reliable runner for the team,” Haney said. “His future bodes well as he continues to improve with each race.”

Rounding out the top five runners for the boys’ team was Andy Christian, Luc Malimanek and Eli Malimanek.

“Emma did a great job of taking over that race with about a 400 meters to go,” Haney said. “It was an outstanding race for Behling, as she ran her best time of the season.”

Albert Lea head coach Jim Haney took home an award himself, as he was named Big Nine Coach of the Year.