Memorial services for Barbara Idelle Foley, of Albert Lea, will be held at 10 a.m. Thursday at Bonnerup Funeral Service, Albert Lea. Friends may call one hour prior to the service at the funeral home. The Rev. Dwight Netzer will officiate. Private interment will be in Lakewood Cemetery. Barbara died on Monday morning, Oct. 25, 2010, at the Good Samaritan Center. She was 87 years of age. 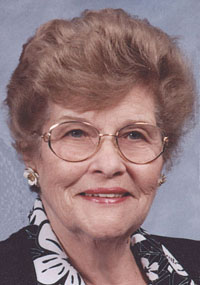 Barbara was born on Aug. 3, 1923, in Chicago, the daughter of Thomas J. and Blanche (Hartman) Thompson.

Barbara is survived by her children: Martha Foley of Buffalo Grove, Ill., Thomas and his wife Pamela Foley of Longwood, Fla., and their children: Brad and Nicholas, Kimber and her husband Alan Swenson of Cody, Wyo., and their children Ben, Casey and Maida, Kirk Foley of Friday Harbor, Wash., and his children: Jessica, Peter and Matthew. There are eight great-grandchildren.