Funeral services for Bob E. Fredrickson, 89, of Albert Lea will be held at 2 p.m. Tuesday at the United Methodist Church in Albert Lea. The Rev. Tom Biatek will officiate. Interment will be in Hillcrest Cemetery with military honors accorded by area servicemen’s organizations. Visitation will be from 5:30 to 7:30 p.m. today at the Bayview/Freeborn Funeral Home, and one hour prior to the service at the church on Tuesday. To sign the guestbook, go to www.bayviewfuneral.com. 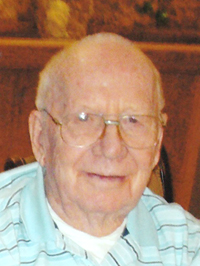 Bob Ellis Fredrickson was born on June 12, 1921, in Glenville, the son of Ben and Florence (Meader) Fredrickson. He grew up and attended school in Albert Lea. Following school, Bob worked at Wilson & Co. During World War II, Bob served in the U. S. Army. He served in the 27th Infantry Division, Company C, the 105th, “Orion”, the New York Division. He saw service in the Asiatic-Pacific Theater and was awarded a Bronze Star. Returning to Albert Lea after his military service Bob continued working as a meat cutter for Wilsons. On May 1, 1941, Bob was united in marriage to Thais Courtright at the United Methodist Church. Bob and Thais were members there and in addition, he was a member of the VFW, the Union Center Retirees Club, the Albert Lea Senior Center, and the Twin Lakes Senior Citizens. Bob enjoyed fishing, hunting, trapping, playing cards and telling stories. He especially liked spending time with his family and his friends.

Survivors include his brother, Ben, and his wife Phyllis Fredrickson; sisters: Elsie and her husband Manton Marcuson and Beverly and her husband Robert Phillips; sisters-in-law: Ruby Fredrickson and Marcella Scott; and many nieces and nephews.

Bob was preceded in death by his parents; his wife, Thais, in 2009; his sons: John Allen Fredrickson in 1969 and Larry Robert Fredrickson in 1991; his brothers: Delmar Fredrickson and Jerry Fredrickson; his sisters-in-law and brothers-in-law: LaVonne and Bill Jackson and LeRoy Scott; and several nieces and nephews.

In lieu of flowers, memorials are preferred to the Fountain Lake Sportsmen’s Club for Take A Kid Fishing Day.