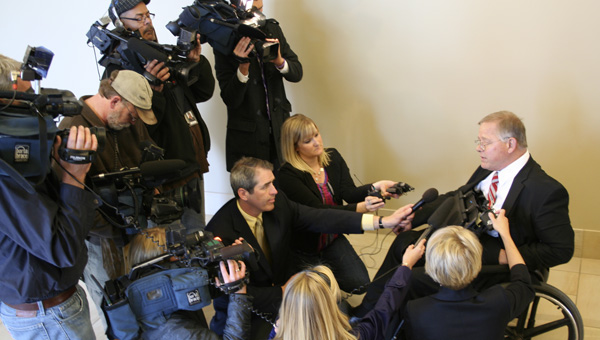 Austin lawyer Larry Maus speaks to the news media about his client, Brianna Broitzman, on Friday in the Freeborn County Courthouse. TV news crews from the Twin Cities and from local stations came to Broitzman's sentencing. -- Tim Engstrom/Albert Lea Tribune

In a case he described as appalling, Freeborn County District Court Judge Steve Schwab on Friday sentenced Brianna Marie Broitzman to a staggered sentence of 180 days in jail and restorative justice for abusing residents at Good Samaritan Society of Albert Lea. 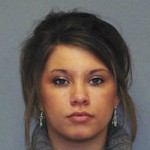 Broitzman, 21, can petition to waive the second two jail terms in writing 30 days prior to the start of each term depending on if she follows guidelines and is deemed suitable for probation.

Schwab also sentenced Broitzman — who was convicted of three counts of disorderly conduct by a caregiver, all gross misdemeanors — to eight days of community service for each count, two of which must be served each month.

She will be required to complete a psychological assessment, submit letters of apology to the families of the three victims in the case, complete one-on-one education with ElderCare Rights Alliance and meet with the victims’ families if they so choose to answer questions.

In addition, she can have no direct or indirect contact with vulnerable adults unless she gets the prior approval of her probation agent and cannot be employed as a caregiver for the time of her probation.

The sentence came in front of at least 20 victims’ family members, friends and family of Broitzman, and numerous reporters. Charges were first filed in December of 2008.

Through tears, Broitzman said she was “forever sorry” for her actions, not only to the victims but also in turn to the victims’ families.

“I’m not going to make up excuses for my actions because there are no excuses,” she said, noting that she can’t go back and change her actions but that she wants to make things right. 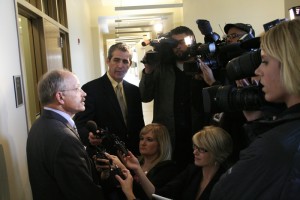 Freeborn County Attorney Craig Nelson speaks to the news media Friday at the Freeborn County Courthouse after he met with members of the families of the victims in the elder abuse case. -- Tim Engstrom/Albert Lea Tribune

It was the first time Broitzman had shown any emotion during the course of the court proceedings.

Broitzman is the first of two young women who pleaded guilty to disorderly conduct by a caregiver in the elder abuse case at Good Samaritan Society of Albert Lea. She is also one of six young women who has faced charges tied to allegations of abuse of residents at the nursing home from January through May 2008.

She and co-defendant Ashton Michelle Larson — who was also in the courtroom with her mother — have been charged as adults. Larson is expected to be sentenced Dec. 22. Larson left the courtroom near the end of the sentencing and was in tears once she entered the hallway.

Schwab said the case has been the most difficult gross misdemeanor sentencing he has ever done and noted that he started looking at sentencing considerations weeks ago.

Because of the way the laws are in Minnesota for gross misdemeanors, he could not consider prison time and he could not order Broitzman to register as a sex offender. He said he is not sure if similar charges had ever been filed in Freeborn County. 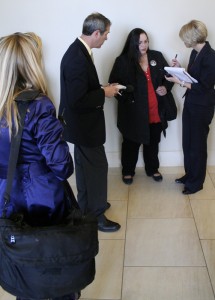 In a hallway of the Freeborn County Courthouse, news reporters interview Jan Reshatar of Albert Lea on Friday about her views on the sentencing. Reshatar is related to one of the victims in the elder abuse case. -- Tim Engstrom/Albert Lea Tribune

Instead, he said he considered several mitigating factors, including whether Broitzman would be amenable to probation and if she had shown remorse or accepted responsibility for the crime. He pointed out that he didn’t see a lot of remorse from Broitzman prior to Friday.

He said he also considered several aggravating factors, including if the victims had been vulnerable, if there were multiple victims and multiple incidents, if the crime had been committed in “a zone of privacy” and if the crime was committed by someone in a position of authority, confidence or trust. The answer was yes to all of these questions.

However, he said the conduct was not designed to physically injure or harm the residents.

Maus said it was the result of “frustration, immaturity, boredom and having nothing better to do, apparently,” but that does not justify it. Stress, peer pressure and a lack of proper training may have also played into it.

“What they were was terribly, terribly stupid and inappropriate to do what they did,” Maus said, noting that the nursing home residents did not deserve to receive the treatment they did.

He noted he agreed with many parts of the pre-sentence investigation, conducted by Andrea Strom, which stated that Broitzman has been remorseful.

He said his client is not taking responsibility for the crime because she was caught but instead she is doing so because she is remorseful about the pain she inflicted. He noted Broitzman has been ostracized in the community, unable to find employment and has had a negative label attached to her. She struggles with her own guilt.

“My client will never forget what she has done,” Maus said.

Now the families can begin to heal.

Freeborn County Attorney Craig Nelson said he also thought the sentencing was appropriate, noting that Schwab took a lot of time to consider the proper sentence.

Nelson said he trusts there will be appropriate sentences in Larson’s case as well.

He also talked about how he hopes the Legislature can reconsider the potential charges and consequences tied to abuse of vulnerable adults.

Look to www.AlbertLeaTribune.com for another story about the reaction of victims’ families.