Bulldogs advance with win over Saints 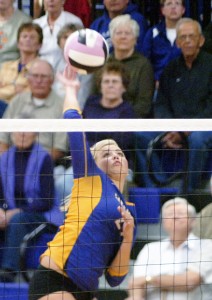 LAKE MILLS, Iowa — The Lake Mills volleyball team hosted the Saint Ansgar Saints in the first-round of the Class 2A Regional volleyball tournament on Tuesday.

Amanda Lampman had a team high 13 kills for the Bulldogs, while Josie Brackey recorded 10 kills and Shelby Kuper had six kills.

Lindy Pins and Brackey led Lake Mills in digs with nine a piece.

Lake Mills also had a great night from the service line as they converted on 96 percent of their serves.

Lake Mills is off until Tuesday when they host North Iowa Conference rival Forest City in the second-round of the Class 2A Regional tournament.