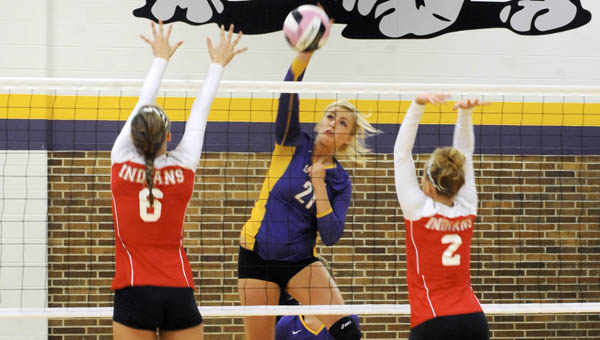 Lake Mills struggles out the gate, beats Forest City in 4

The No. 6 Bulldogs (41-1) faced early deficits in three of four sets Tuesday, but shook off the scrappy Indians team to win 3-1.

“I had a stress filled night,” Boehmer said. “I would rather not play the same team four times, especially Forest City.” 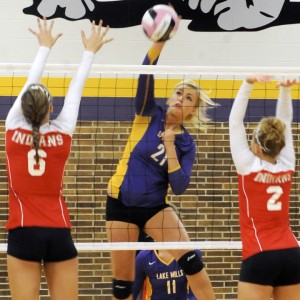 Knotted at 7-7, Lake Mills’ Morgan Fjelstad recorded a kill to put the Bulldogs up 8-7 in the first set and they never relinquished the lead.

“We were aggressive offensively with the serve,” Boehmer said, of the opening set. “We controlled the tempo.”

In the second set, the Bulldogs trailed the Indians 21-20 after they hit a kill attempt out of bounds.

Two Indians’ unforced errors and kills by Lindy Pins and Josie Brackey put the Bulldogs ahead 24-21 en route to a 25-22 win.

The Indians dominated the third set, as the Bulldogs never got going and trailed by as many as 11 points at 23-12.

The fourth set was close early as the Bulldogs held a 13-12 lead midway through. Lake Mills scored 12 of the last 15 points to win the set 25-15 and advance to the regional semifinals.

Amanda Lampman led the Bulldogs with 15 kills and three ace blocks. She also went 19-for-20 serving for 20 points with two aces.

Brackey was a perfect 12-for-12 for the service line.

Lindy Pins and Micah Peters were the team leaders with 13 digs a piece, and Fjelstad led the Bulldogs with 44 assists.

The Bulldogs host South Winnishiek at 7 p.m. Friday in the Region 6 Class 2A tournament semifinals.