The Albert Lea woman arrested Thursday in connection to multiple burglaries in both rural Freeborn County and Albert Lea was charged in Freeborn County District Court on Friday with what authorities are calling the first three out of more than a dozen charges expected regarding recent reported burglaries. 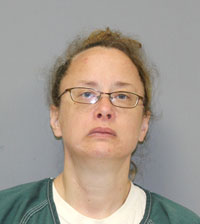 According to court records, Spicer reportedly broke a window or smashed a door to gain access to each residence before ransacking the kitchens and bathrooms in the homes looking for prescription medication.

She reportedly admitted to deputies she broke into each of the three homes.

For the burglary reported Sept. 29 on 180th Street, Spicer reportedly used a cement bird bath to smash the window to the northwest door of the home. After the glass was broken, she allegedly reached in through the window to unlock the deadbolt on the door and cut herself in the process.

Blood droplets were found on the carpet leading from the broken door to the upstairs bathroom, where blood was smeared on the light switch and the drawers, among other places. Authorities also found open kitchen cupboards.

Detectives lifted latent fingerprints from inside the house, took blood samples from the switches and drawers and took photos of footprints, records state.

For the burglary reported Oct. 5 on 700th Ave., Spicer reportedly gained access to the house by breaking a window on the west side of the house. There was a piece of wood laying underneath the window that had pieces of glass embedded in it, court records state.

Inside the window there was a piece of glass with blood on it along with other blood droplets, documents continue.

“It was evident that the burglar had walked through the main level and the basement of the house because of the blood smears and droplets left behind,” records state.

Blood was found on the light switches to the downstairs bathroom, along with a blood droplet on the bathroom sink. Upstairs, there was a larger amount of blood on the handles and front of the refrigerator.

As far as the homeowner could tell, there was nothing taken from the residence or from his property outside.

For the burglary reported Oct. 5 on 230th Street in Alden, Spicer reportedly gained access to this residence by breaking a window on the east side of the residence with a 5-gallon bucket, according to court records.

A blood smear was found on the top of the refrigerator that was directly underneath the broken window. Deputies found that the kitchen and bathroom had again been gone through.

Authorities found a prescription pill bottle laying on the floor of the bathroom along with a bandage box with blood on it and a gauze roll.

A bottle of 100 mg of Dilantin was missing, which contained 115 pills. Blood was found on several other prescription pill bottles in the house.

Nothing else besides the medication was missing.

During an interview with three deputies at the Freeborn County jail after her arrest on Thursday, Spicer allegedly admitted to seven burglaries in the county. She said she was reportedly looking for Vicodin and nothing else.

She also told police she knew some of the people whose homes were burglarized, and the others were just randomly chosen.

“She also said that she would go out looking for potential houses to burglarize once she ran out of pills,” the complaint states. “She said that she would drive up to the house and knock on the door and then figure out a way to enter the residence.”

Spicer faces a maximum penalty of 10 years in prison and a $20,000 fine for each second-degree burglary charge.

Look to the Tribune next week for further coverage.