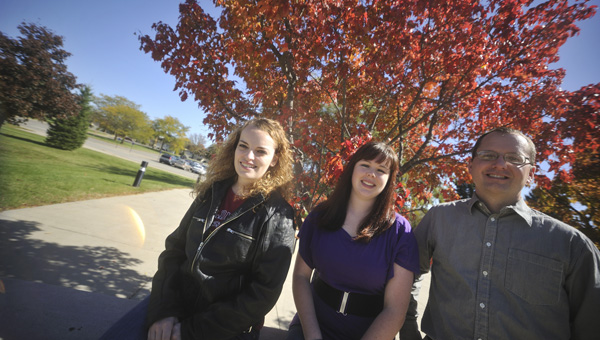 AUSTIN — On every other Friday, the Riverland Gay Straight Alliance meets in a classroom at Riverland Community College. They meet to talk about current events in the media concerning gay, lesbian, bisexual and transgender issues, to discuss events and plans they want to host, and to “come together and feel safe,” as Cindy Duncomb, a third-year student at Riverland and one of the GSA members, said.

Riverland’s GSA, a campus group since 2003, is one of several interconnecting groups in the Austin community that advocate GLBT equality as well as offer support for those who identify themselves as queer. They are among the first people to feel the stings and repercussions of national media attention — or refocus — on gay issues, which is why they try to talk to the public about GLBT issues.

“It’s heartbreaking,” said Kirsten Lindbloom, a local GLBT advocate. Lindbloom has followed the recent national renewal of interest in bullying, especially gay bullying, since the death of Tyler Clementi, a Rutgers University student who committed suicide after his roommate and a friend secretly taped a sexual encounter Clementi had with another male, then posted it online.

“It’s very hard to watch because we know that our young people are struggling and that our environments aren’t conducive to dealing with them and with who they are,” Lindbloom said. “It seems so preventable to me, and I think that’s what makes it so heartbreaking. These kids needed to be supported.”

To that end, groups like GSA stay busy educating people about GLBT-related issues, like gay marriage and the stigma surrounding homosexuality and alternative sexual preferences. The GSA, for example, actively participates in Lobby Day at the state Capitol every year, speaking with senator’s representatives and making presentations. They also campaign around Riverland and the community as well, holding inclusive events for the community such as Big Gay Movie Nights as well as Big Gay Picnics, according to GSA adviser Scott Blankenbaker. They also do poster campaigns for GLBT celebrations such as the Pride Parade and National Coming Out Day, which occurs on Oct. 11.

“One of my really good friends is gay,” Duncomb said, explaining why she’s a part of the GSA. “It’s my way of helping him and showing my support.”

One of the larger collaborations the GSA participates in is a series of performance presentations put together by Stage Left, a theatrical group that takes material from plays, poems, spoken word and other performance art focused on gay issues for colleges, schools, companies and other audiences.

“We perform them in ways to advocate and teach about homosexuality,” said David Albino, a former Riverland student who still participates in GSA and Stage Left, which also is an acronym for Straights and Gays for Equality-Listening, Entertaining, Facilitating, Teaching.

Stage Left, which is organized by Lindbloom and Blankenbaker among other community members, has toured since 2007, in such places as the League of Minnesota Human Rights Commissions Conference and universities across the Midwest. No two performances are the same, according to Lindbloom, as the cast of actors rotates out depending on which members of Riverland GSA and Q&A, an Austin-based community group of parents of GLBT children, heterosexual allies and GLBT persons from Austin, Albert Lea, Rochester and the region.

Each actor or actress has memorized a piece or a role from a play, including works like “The Laramie Project” and “The Children’s Hour,” to perform whenever they can.

“We address the impact of name-calling, bullying, just the sheer challenges of being open and coming out,” Lindbloom said.

Those challenges can be difficult to get across to people, however.

That won’t deter the GLBT advocates around here, though. Stage Left plans on performing in Austin later this fall and Winona State University in the spring. GSA also plans on partnering with Riverland’s branch of Amnesty International to promote National Coming Out Day next Monday. Of course, each group will continue to support those who can identify with them.

“I would say, just by being a presence on campus, I think is a big means of there support,” Blankenbaker said.