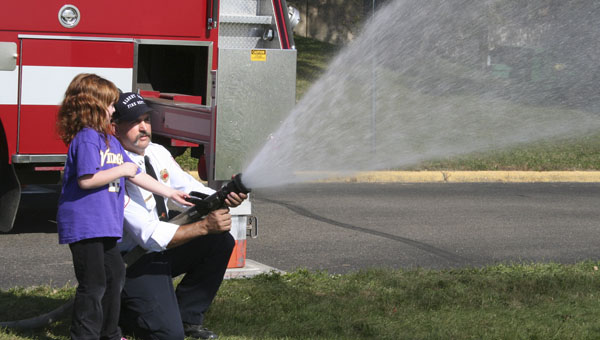 Albert Lea firefighters visited area preschool and elementary school students this week to educate the children about fire safety and give them a firsthand peek at some firefighting equipment.

As part of National Fire Prevention Week, the firefighters were at Sibley Elementary School on Friday visiting with the first-graders. The firefighters brought with them their engine pumper truck and ladder truck.

They also reviewed the stop, drop and roll process, and what to do if they ever find matches or a lighter. 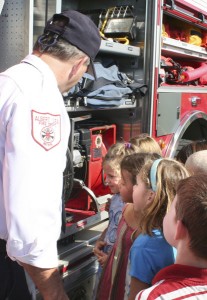 Sibley Elementary School students look in awe at some of the equipment on one of the Albert Lea Fire Department's firetrucks on Friday. -- Sarah Stultz/Albert Lea Tribune

Berven briefly talked about how families should develop an escape plan to get out of their houses safely in case of a fire.

After reviewing some fire prevention basics, one firefighter climbed up the ladder, and it was extended into the sky as the children looked on in awe and waived.

After that, student Kaitlyn Hanna and her grandfather Scott Hanna, a firefighter, demonstrated how to use a firefighter hose. They also got to look at some of the gear in the fire trucks.

It was one of several educational efforts the department has made this week to further the goal of fire prevention.

On Saturday, they were also scheduled to host an open house at the fire station to help people learn more about their duties.

Sibley Elementary School first-graders wave to an Albert Lea firefighter at the end of a ladder n Friday. The firefighters came to the school to talk about fire safety. -- Sarah Stultz/Albert Lea Tribune

Fire Prevention Week is sponsored by the National Fire Protection Association to build awareness of fire causes and safety measures. The theme of the week has been “Smoke Alarms: A Sound You Can Live With.”

According to the association, advanced warning increases the chance of surviving any building fire by 50 percent.

Authorities are encouraging people to install smoke alarms and then test them regularly. People should also practice a fire escape plan with their families. 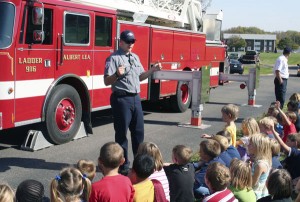