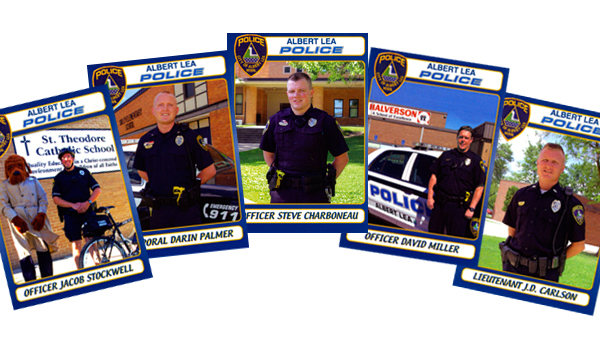 The Albert Lea Police Department, together with Freeborn County Partners in Prevention and Youth for Christ, are hosting an event Friday to introduce children in the community to local officers.

Starting at 2 p.m. Friday, officers will be distributing a set of five trading cards featuring different Albert Lea officers at Youth for Christ’s The Rock on Clark Street.

Albert Lea Police Lt. J.D. Carlson said he hopes the event will not only allow children the opportunity to get to know and trust local officers, but also in turn aid in the prevention of drug and alcohol abuse.

According to a survey conducted with Freeborn County sixth-, eighth-, 10th- and 12th-graders each year, there are many kids in the area who are having their first alcoholic drinks when they are in sixth and seventh grades, Carlson said.

Because of this, these three entities have a goal to increase education and drug and alcohol abuse prevention among grade-schoolers.

He pointed out there are school resource officers at both Southwest Middle School and Albert Lea High School, but there aren’t officers at any of the elementary schools.

This event will hopefully give children the chance to interact with the officers in that critical period before middle school, Carlson said.

McGruff the Crime Dog will also be in attendance and people are welcome to take pictures with him.

Carlson said he hopes the children will learn that officers can be their friends and that officers are in the community to serve and protect them.

Children younger than elementary school are invited to attend with adult supervision.

Carlson said officers previously handed out baseball, hockey and other sports cards to children in the community; this time the trading cards each feature one of five different local officers in front of one of the elementary schools, some information about the officers and a tip about drug and alcohol safety.

Alice Englin, coalition director with the Freeborn County Family Services Collaborative and the Freeborn County Partners in Prevention, said the cards are made possible through a Drug-Free Communities Support grant from the federal government. The grant aims to encourage collaboration in the community and prevent and reduce youth substance abuse in the county.

Englin said she hopes the Friday event will help children know they are welcome in the community and that there are people there who care about them.

Rick Miller with The Rock said his organization decided to host the event because it is something that will benefit the community.

Youth For Christ has previously gotten involved with the Police Department on other occasions as well, including removing graffiti.

More than 2,500 of the new trading cards were given out at a booth at the Freeborn County Fair. Cards were also given out the first week of school.