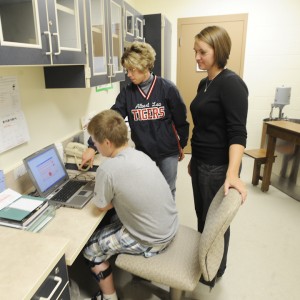 There are currently five Albert Lea Tigers football players sidelined with concussions, the most at one time since 2006.

They’re all out because they’ve taken hits to the head and are possibly experiencing headaches, nausea and sensitivity to light. But they’re also out because their verbal and visual memory, and reaction time is below normal — something Albert Lea Medical Center athletic trainers Lynn Scheevel and Afton Wacholz began tracking four years ago with ImPACT, a computerized neurocognitive assessment tool used to diagnose concussions and help get athletes back on the field.

“It’s an unbelievable tool,” Scheevel said. “It helps take the guess work out.”

Prior to 2006, diagnossing concussions among Albert Lea athletes was subjective, and Scheevel and Wacholz relied on the 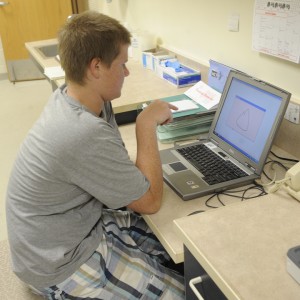 A ninth-grade football players concentrates on patterns on the screen while taking an ImPACT test after practice. -- Andrew Dyrdal

injured player’s description of their symptoms to make a diagnoses.

With ImPACT, they’ve brought objectivity into the training room

“It’s a lot easier to communicate with parents,” Scheevel said. “It’s not like you’re trying to make a point to parents and trying to make them have faith in you.”

Before each season, the athletic trainers test athletes who participate in high risk sports — such as football, soccer, hockey and wrestling — to get their baseline numbers. These numbers tell Scheevel and Wacholz how the athlete’s brain behaves when it’s normal.

After an athlete takes a hard hit, they’re tested again. If the results are lower than the baseline — indicating slower reaction time and memory loss — the athletic trainers have concrete evidence of a concussion.

The test is done on a computer using the keyboard and mouse, and is like a video game, according to Wacholz. The athletes need complete concentration to take the test and are often given a room to themselves, where they can focus on remembering words, patterns and shapes, and which side of the mouse to click depending on whether they see a red of blue squs pop up onto the monitor.

“The kids don’t seem to mind taking it,” Scheevel said.

After taking a hit, athletes usually aren’t tested for 24 to 48 hours so that they give their brain the necessary time to heal.

“For people who are really struggling, it may be too early to test the next day,” Scheevel said. “They won’t be able to focus on (the test).”

Often times, athletes who have suffered a concussion won’t even be in school while they’re recovering, because the stress of academics can slow the brain’s healing process like athletics do.

“We’re actually promoting that they stay home from school,” Wacholz said, of concussed student-athletes. “School activities could make them worse.”

The athletic trainers also communicate with the high school’s counselors to let them know that a concussion may lead to a decline in academic performance.

While student-athletes are only out of school until their symptoms subside, it takes longer to get back to full participation in sports.

If an athlete’s baseline numbers are too low, they are tested again no earlier than four days later. Once their results are back to within an acceptable, safe range and their symptoms are gone, they may participate in conditioning only.

If the athletes’ symptoms don’t reoccur, they are cleared to participate in a half practice and then a full practice before being allowed to play again.

“If anything flares up in that process they are stepped back down,” Scheevel said. “They back step, rest and then try again.”

Scheevel, who has worked as an athletic trainer for ALMC for 16 years, says that a decade ago people used the term ‘getting your bell rung’ to refer to what are now known as concussions. If an athlete didn’t lose consciousness, it was thought they didn’t have a concussion.

“If (an athlete) had gotten their bell run and shook it off, we would likely put them into the game,” said Scheevel, of the approach to injuries 15 years ago. “Then they’re likely to take a second hit and that’s when the brain is traumatized.

“You don’t have to lose consciousness to have a concussion. That’s a myth.”

The athletic trainers said that concussions are more prevalent in the media now because some research shows they can lead to, long-term brain damage.

They said the key is to avoid second impact syndrome and that if a player takes a second hit before the brain is completely healed, long-term damages come into play.

Wacholz admits that she isn’t certain that concussions can lead to diseases such as Alzheimer’s and dementia, but says the possibility isn’t worth the risk.

“Being proactive about (concussions) may eliminate those long-term effects.”

Either Scheevel and Wacholz, or both, are at all ALHS athletic practices and events, even though they’re ALMC employees.

ALMC donates the athletic trainer’s services to the Albert Lea School District and also funds the annual cost of the ImPACT system.

“We are very lucky,” Scheevel said, of the school district’s resources in diagnosing and treating concussions.