After spending two seasons playing hockey with the Albert Lea Thunder hockey team, Danny Wood decided he was interested in running one of his hockey camps in Albert Lea. “I wanted to have the chance to work more closely with the players and people in the community that gave me a lot during the time I played for the Thunder,” he stated. So this past August, Wood, former Thunder captain, ran a youth hockey camp in Albert Lea. 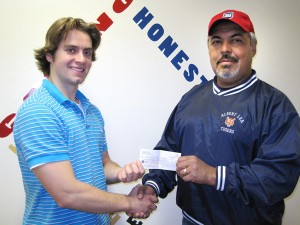 “As an athlete playing at a high level, you are presented with special opportunities. It is important that you use those opportunities to give back to the game and the community where you can,” Wood said. “Being in such a position gives the game more purpose in my eyes. Hopefully, this is a long standing relationship between the community of Albert Lea and myself.”

Wood chose to make a donation from the camp proceeds to the Albert Lea Family Y for equipment for local athletes to use.

“The equipment can be used by all athletes, not just hockey players. It will help further the development of their chosen sport,” Wood said.

Wood is also certified through the YMCA as a personal trainer.

Wood’s business running youth hockey camps and private hockey tuition clinics has been thriving in his home state of Ohio over the past three years. He is currently a freshman at St. Mary’s University in Winona where he is studying biology with the intention of becoming a dentist. St. Mary’s plays in the MIAC and recruited Wood during his time with Albert Lea Thunder.