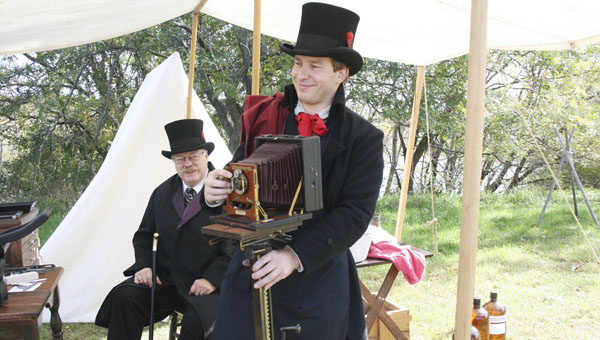 That was the advice that Joerg Rochlitzer and Burdette Walters were giving as they took snapshots of curious onlookers with their 1870s era camera on Saturday at the 24th annual Big Island Rendezvous and Festival at Bancroft Bay Park in Albert Lea.

“If you can’t keep still, that’s what your future ancestors will see in the picture,” said Rochlitzer, a German native and professor of social sciences at Ellsworth Community College. 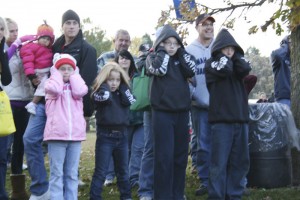 Spectators cover their ears for the big bang of the cannon shooting at Saturday's Jerome Mickelson Memorial Shoot at the 24th Annual Big Island Rendezvous.

In their fourth year at the tintype photography booth at the festival, Rochlitzer and Walters showed off the centerpiece of their booth: the Telephoto Cycle Poco B.

Rochlitzer said the camera was circa 1870, made by the Rochester Manufacturing Co. (which was later bought out by Kodak).

“The tintype is unique because you take the picture directly with the tin plate,” said Rochlitzer. “There’s no negative, no disk. What the camera sees is what you get.”

In a good weekend, he said he can crank out 15 photographs. 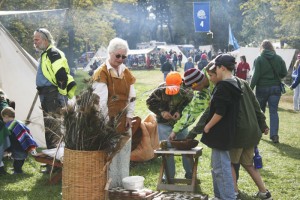 One camper at the rendezvous hands out cattails to a group of curious bystanders.

Also on display at the tintype tent was an 1870s era print press. Rochlister had a tray of 19th century printing blocks, used in old-time newspapers and catalogs.

He pointed to a block used in Sears & Roebuck catalogs in the 1800’s. Another was from a newspaper in Deadwood, S.D., also circa 1870s, that Rochlitzer got for just $5.

“Just this morning, we printed a newsletter that said, ‘Good morning, friends,’” said Walters. “We set the type, blocked it, inked it and pressed it right here.”

Festival-goers marveled as they came in and out of the tintype booth, complete with a teepee as the darkroom, some showing off modern-day digital cameras of their own. Walters took the opportunity to explain the old saying, “You can bet your tintype on it.”

“Tintype was a precious thing,” he told the crowd. “It cost a dollar or two, and if you made $15 a month and owned one, that was really something. So the tintype was really worth something back then.” 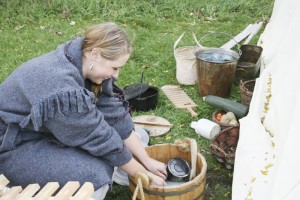 Holly Erickson of Plymouth washes dishes in a wooden bucket outside of her teepee at the rendezvous on Saturday.

Rochlitzer and Walters weren’t surprised by the attention the tintype photography tent was drawing on Saturday at the event.

“Since the death of photography, people are really interested in the process because it is 150 years old,” said Rochlitzer.

“People like hand crafted things,” he continued. “Everyone is able to use a digital camera, but most people can’t make a tintype. It’s like a drawing.”

Old-time day to day living was the big draw all around, as hundreds were taking buses to the top of the hill and more than 1,000 people reportedly set up camp at the annual event.

The festival continues today from 9 a.m. to 4 p.m. at Bancroft Bay Park. 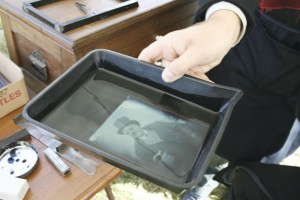 Joerg Rochlitzer shows off a photograph of Burdette Walters, taken with his 1870s style camera at Saturday's rendezvous. 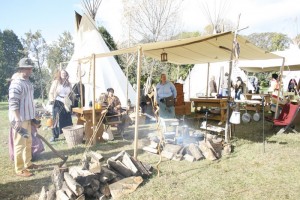 The Bad Ax Clan, with families from Mankato, St. Peter and Hawkeye, Iowa gather at their camp site at Saturday's rendezvous. 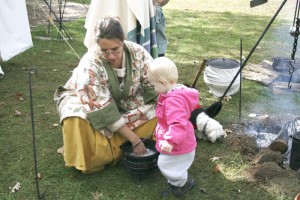 Stacey Hormann of Litchfield and niece Annalee Cummings wash dishes at their camp site at the rendezvous on Saturday. 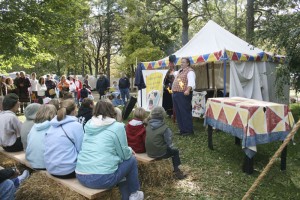 Over 150 spectators gathered around for Professor Bodkin Childs' Amazing Patent Medicine and Magic Show at the rendezvous on Saturday.