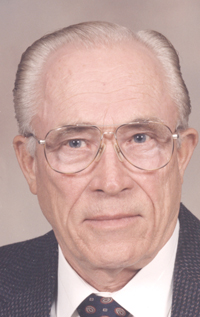 Duane was born on Dec. 6, 1927, in Freeman Township to Emil J. and Olga (Amundson) Stenseth. He was baptized and confirmed at Round Prairie Lutheran Church. Duane died Oct. 20, 2010, at the Good Samaritan Center where he had been a resident since March 2010. He was 82 years old. Except for the time he spent in the Army, Duane lived his entire life in the Albert Lea area. He attended country school and also attended Albert Lea High School. He served in the U.S. Army in 1946 and 1947.

Duane worked in heating and sheet metal work his entire working years, at Andy’s Sheet Metal and Heating for many years until the business was sold in 1971. He started his own business, Hilltop Heating and Sheet Metal in 1972, and operated that until his retirement in 1992.

On July 8, 1961, Duane and Virginia Sullivan were married at St. Theodore Catholic Church Rectory. He enjoyed fishing, hunting and gardening. For many years he and a brother-in-law had a Sunday ritual of playing cribbage. He was a member of the Eagles for 63 years.