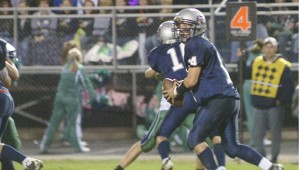 WELLS — After suffering a 61-13 setback to Waterville-Elysian-Morristown last week, the United South Central football team looked to get back on track against the Maple River Eagles on Friday.

The Eagles’ Jaron Denn picked off Rebels’ quarterback Eric Lackey and ran it back 23 yards for a crucial touchdown, and Eagles’ 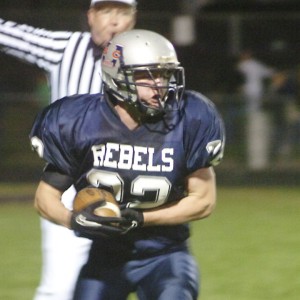 USC’s Teddy Wiebold runs with the ball during the third quarter Friday of the Rebels 19-0 loss to Minnesota Valley Lutheran. -- Jon Theuer

running back Scott Schoneck scored a 26-yard touchdown late in the fourth quarter that propelled the Eagles past USC 19-0.

It’s the second time in three games that the Rebels have been shut out.

“Offensively, we didn’t execute,” USC head coach Brad Huse said. “Way too many penalties. Way too many turnovers to be in the game. Our defense played well so I thought we were right there and we needed to establish something on offense, and we couldn’t do it.”

The Eagles defense held the Rebels to 33 rushing yards on 33 attempts and only gave up 107 total yards.

“We’re getting beat up on the line,” Huse said. “We need to make better reads at the quarterback position.”

Perhaps the turning point of the game came in the third quarter.

With first-and-10 at their own 23-yard line, Rebels quarterback Eric Lackey went back to pass and unleashed a throw that was picked off by Maple River’s Jaron Denn.

Denn raced 23 yards for the Eagles touchdown and pushed the Maple River lead to 10-0.

“When we’re down there we can’t make mistakes,” Huse said. “When they have a pick six it’s a killer.”

After a Tyler Olson 23-yard field goal, his second of the night, the Eagles pushed the lead to 13-0 going into the fourth quarter.

In the fourth quarter it was Maple River running back Scott Schoneck that put the exclamation point on the game as he bolted 26 yards for the touchdown with 1 1/2 minutes left that put Maple River up 19-0.

USC committed 13 penalties that resulted in 105 yards, while Maple River had 10 penalties for 95 yards.

With the loss, the Rebels now drop to 2-5 on the year and get ready to hit the road as they travel to New Ulm on Wednesday to take on Minnesota Valley Lutheran, who defeated NRHEG 20-13 on Friday.

“We have to get right back in there on Monday and make some changes and get ready for MVL,” Huse said.