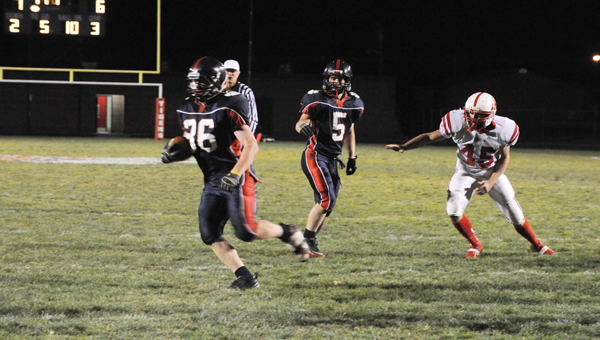 Albert Lea’s Dillon Stolt (36) runs with the football while Ethan Abben (5) watches. The Tigers play at Faribault in the first round of the Section 1AAAA tournament. -- Andrew Dyrdal/Albert Lea Tribune

The Tigers play Tuesday at Faribault in the first round of the section tournament — a team they lost to 42-21 on Sept. 27, but feel they can beat. 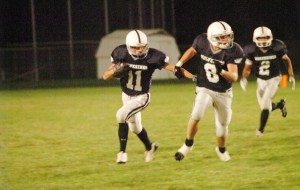 The Falcons beat New Prague 12-8 in the first week of the season, so the Tigers should feel confident in a second semifinals matchup with the Trojans should they get past the Falcons.

Kickoff between the Tigers and Falcons is at 7 p.m. Tuesday at Faribault Alexander Park.

The New Richland-Hartland-Ellendale-Geneva Panthers football team (5-3, 1-2 Section 2AA) started the season 4-0, but lost three straight games and stumbled into their 24-22 win over Gibbon-Fairfax-Winthrop (0-8, 0-0 Section 4AA) in the regular season finale.

While the Panthers are 5-3, all of their wins have come by a combined 11 points including a two-point victory over Blooming Prairie (6-2, 3-0 Section 1A) — their most quality win on the season.

NRHEG must play with confidence and try and establish and early lead, though most of their wins have come from behind.

Kickoff between the Panthers and Eagles is at 7 p.m. Tuesday in Mapleton.

Wolverines hope for a different result against a familiar opponent

That contest was one of only three close football games the No. 5-seeded Wolverines have played in all season.

Though the Wolverines lost their season finale 41-28 to the No. 1 Grand Meadow Superlarks (7-1, 7-1), they’re confident after playing well against one of the state’s top teams.

The Wolverines played the Superlarks much closer than the No. 5 Hurricanes’ 42-6 loss to Grand Meadow on Oct. 1. That score differential should tell Glenville-Emmons they’ve got a good shot at beating Houston tomorrow night.

Kickoff between the Wolverines and Hurricanes is at 7 p.m. Tuesday in Houston.

Rebels must find offense against Southland

The United South Central Rebels (3-5, 0-3 Section 2AA) football have averaged only 11 points per game this season.

After starting 2-2, the No. 6-seeded Rebels have gone 1-3 to end the season and averaged just seven points per game during that stretch.

They’ll need more offensive production, especially from the quarterback position, to have a chance at beating the No. 3 Southland Rebels (6-2, 0-0) in the first round of the Section 2AA tournament.

Southland averaged 37 points per game in the regular season, something that USC will have difficulty keeping up with.

Kickoff between USC and Southland is at 7 p.m. Tuesday in Adams.

The Vikings look to ride momentum at home

After losing their first five games of the season, the Northwood-Kensett Vikings (4-5) football team won four straight to earn a spot in Iowa’s Class A postseason tournament.

Quarterback Spencer Capitani has been the difference maker for the Vikings, rushing for 585 yards in those four wins, including 254-yard outpouring in a crucial win over West Hancock on Oct. 1.

The Vikings have averaged 42 points in their four wins and are a different team than at the start of the season.

The late season success put them into the playoffs and a opening round home game against Clay Central-Everly (7-2).

Kickoff between the Vikings and Clay Central-Everly is Wednesday at 7 p.m. in Northwood, Iowa.