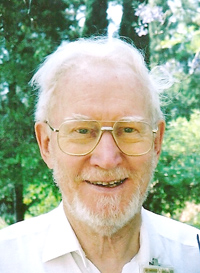 Elmer was born April 3, 1924, to Jens and Emma (Johnson) Christensen in Albert Lea, joining sister Evelyn and brother Earl. His youth was filled with family, small-town activities and family travel throughout the U.S. and Canada. He graduted Albert Lea High School in 1942 and attended the University of Minnesota studying mechanical engineering. Elmer was drafted in April 1944 and served in the US Army through June 1946. Following VE Day, Elmer traveled extensively throughout Europe continuing a lifelong passion for travel and a new passion for downhill skiing.

His career with the Jet Propulsion Laboratory in California from 1956 to 1987 included significant project engineer responsibilities with lunar and Mars unmanned exploration missions including a two-year assignment to NASA Headquarters. Prior to retirement he was involved in research on large-scale renewable energy power generation (geothermal and photovoltaics).

Elmer continued his passion for travel following marriage to Ginger in 1983. Elmer and Ginger led “Dance Across Europe” and other tours to Asia and the South Pacific through the 80s and 90s. Their passion for activism and volunteering was significant through their involvement with the Pasadena Sister Cities group in Ludwigshafen and especially Elmer’s leadership in establishing a Chinese Sister City, their churches and the JPL Retirees Club. They continued their travels together through the 1990s and early 2000.

The next phase of Elmer’s life involved sharing time, interests and planning travels with companion Kay, while continuing his commitment to the Sister Cities, churches and JPL groups. Active days of travel in Europe and the U.S. to visit relatives, historic sites and attend Elderhostels, and involvement in his passions, were tempered by relaxing days at a quiet Eastern Sierra lake cabin.

Elmer now joins Ginger; his parents; sister, Evelyn; brother, Earl, and other family and friends who have passed.

His companion, Kay; children: Grant, Vicki and husband Todd, Emily and Bert; sister-in-law, Irene; and nephews: Alan and wife Ann and Jerry and wife Marcie and their families celebrate his faith, vitality, dedication and devotion to people, lifelong interest in learning, volunteerism and his enthusiasm for a rewarding and meaningful life.