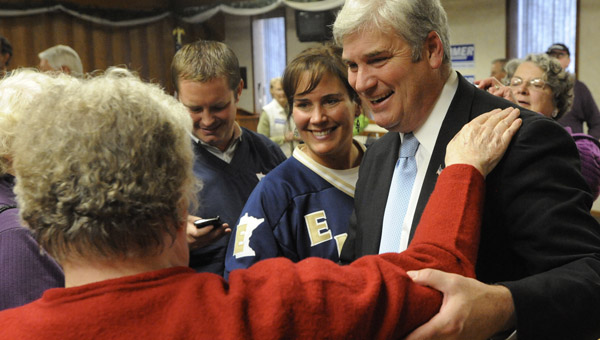 Speaking in front of a crowd of about 200 people, Republican gubernatorial candidate Tom Emmer on Monday promoted his plan for a balanced budget — something he said neither of his opponents has developed.

During a campaign rally at the American Legion Leo Carey Post 56, Emmer said he thinks the people of Minnesota have been living on the burdens created by government for too long. He said he thinks it’s time for government to start living within its means. 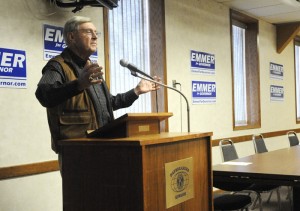 “We only have a deficit if we’re committed to spending more than we have,” he noted.

He pointed out a few times that his opponents — Democrat Mark Dayton or Independence Party candidate Tom Horner — have not been able to present the Minnesota Department of Revenue with a budget that has passed without a deficit.

Delano resident Emmer, the state representative for District 19B, also talked about reforming government to make it efficient, grow jobs and grow opportunities.

He said he plans to grow jobs by lowering the corporate franchise tax. While many business owners have a lot of uncertainty about the economy, doing this would give them new reasons to expand their businesses or to hire more employees.

He also promotes reducing commercial property tax and expanding research and development tax credits, among others.

“Minnesota doesn’t have to be the cheapest place to do business, but it has to be competitive,” Emmer said.

He pointed out that his balanced budget includes $625 million in tax incentives. 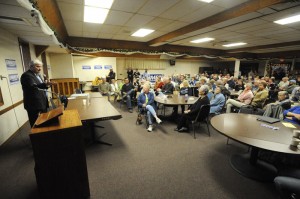 Tom Emmer, a Republican from Delano, speaks at the American Legion Club in Albert Lea on Monday during his campaign for state governor. He spoke about controlling the size of government and setting up a rewards system for good teachers, among other topics. -- Tim Engstrom/Albert Lea Tribune

As the only gubernatorial candidate with children still in the public school system, Emmer said his education proposal is focused on three major areas: measuring, reporting and rewarding.

First, children need to be measured to determine their baseline; then, their progress needs to be reported, not only to school officials and the state but to parents as well.

Parents need to be empowered to know whether their child is in the best place for their situation.

Lastly, he said, teachers should be rewarded for successes in the classroom. And teachers who cannot teach should be counseled to enter other fields.

He said he agrees with a reform of the education funding formula because he believes there should not be inequalities for children in one part of the state, compared with another.

“A child is a child no matter where that child lives,” Emmer said.

Emmer said he thinks the state needs to continue promoting the Beyond the Yellow Ribbon campaign and support families of people in the military, both while they’re away overseas and when they return.

He said he supports reintegrating veterans back into society after they return from service and supporting veterans as they advance in age.

He noted he would never disregard veterans by suggesting they are a special interest group.

Regarding Health and Human Services funding, Emmer said he supports protecting the funding for that department right now and then increasing the spending in that area by between $625 and $650 million.

He said he wants to limit the fast growth predicted for that state department.

He said he also supports reforming Minnesota Care so that is a private health care premium voucher, along with reforming other programs so that they are designed to empower people.

When asked what he thought of the new law in Arizona regarding illegal immigration, Emmer said he thinks the law is “a good start.”

He said he supports immigration to the United States; he just believes it needs to be done legally. People who move to this country should become contributing members of society, learn to speak English and participate as Americans.

After taking questions from the audience, Emmer asked the people in attendance to get involved in the election process.

“This is the election that’s going to determine the direction of the state,” he said, noting that he does not think the state can afford to continue down the path it is on.