End result is the reward 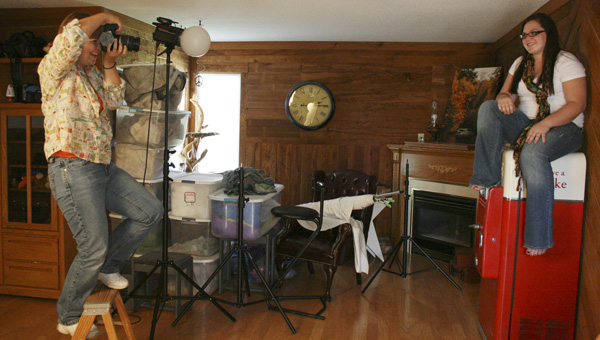 Sanderson works on senior photos with Tanelle Roberts. She has worked with the Roberts family for a long time and has enjoyed watching each child grow up. -- Kelli Lageson/Albert Lea Tribune

LAKE MILLS, Iowa — A local photographer enjoys being her own boss and being able to help out one of her favorite causes — rescuing animals. 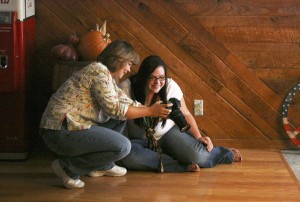 Sanderson shows Tanelle Roberts a photo on the screen of her digital camera. Sanderson said digital photography has been fun compared to when she started with film photography. -- Kelli Lageson/Albert Lea Tribune

Patty Jo Sanderson, of Lake Mills, owns her own photography business. She is an animal lover and has been supporting Freeborn County’s Humane Society in a couple different ways. She gives 10 percent of proceeds from any photography jobs in Freeborn County to the society and also takes photos of the animals. She puts these online and on the board of adoptable pets at Pizza Ranch in Albert Lea.

“I’ve always given to the Humane Society,” Sanderson said. “I also get pets through them.”

Sanderson has a handful of cats and two pet raccoons at her home. Also, if people adopt a pet from the Humane Society she will donate a free family photography session in her studio to the family.

Sanderson said she’s always had in interest in photography. Her mother liked photography and introduced it to Sanderson while she was growing up. After working a variety of jobs, Sanderson decided to go to the School of Communication Arts in Minneapolis. During her schooling the students had to choose between a focus like photojournalism or portraiture. She decided on portrait photography because she likes helping people create good photos of themselves.

“That’s part of the fun is figuring out what they want,” Sanderson said. “When they see the end result — that’s the reward.” 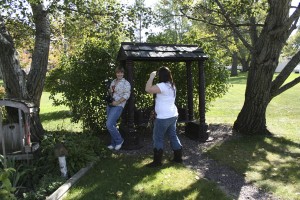 Patty Jo Sanderson shows Tanelle Roberts how she can pose. She likes when seniors take her to a place that’s special to them for their photos. -- Kelli Lageson/Albert Lea Tribune

After her schooling Sanderson worked at John Carlson Photography in Lake Mills. She liked that she was able to use the newest technology, because cameras and photo editing software have changed so much over the years. She has liked being able to use film and digital cameras.

“Film forced you to be a better photographer, but I’d be lying if I said I wanted to go back,” Sanderson said.

Sanderson said she eventually got worn out with the pace of the studio. There were many employees and many sessions. After a while she said she didn’t like the factory feel of working in a studio.

“We had to say yes to every job — it just wasn’t fun anymore,” Sanderson said.

She said she doesn’t regret anything about working for the studio, but the pace was hard to handle. She decided to leave the studio and was planning on finding another career until people started calling her and asking her to do freelance photography sessions.

“I do just about anything that comes my direction,” Sanderson said.

She often does sessions for high school seniors, weddings, family portraits and baby photos. She enjoys being able to take time to get to know her subjects so each photo can be unique and more about the person. Sanderson said she loves photography and would do her work for free if she were rich.

“It’s hard to put a price on your passion,” Sanderson said.

She does much of her work in her home and around Lake Mills. She said she really enjoys when a person will take her to their favorite place so the photo means more to them. Some people have taken photos by a certain bridge, on a golf course or at a park that has a special meaning to them.

Along with her love of pets Sanderson loves to travel. She recently went to Australia and has plans to go to New Zealand, and she likes to take photos during her travels.

Interesting fact: Sanderson  has had a pet raccoon for 14 years.