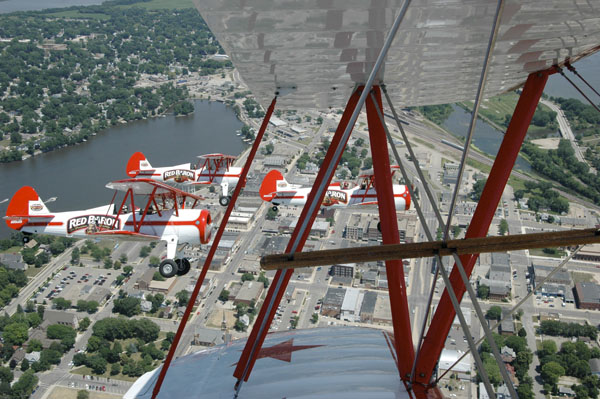 Photographer Adam Hammer, who now works for the St. Cloud Times, is afraid of heights. Being a former Army paratrooper, I am not. Though I could shoot with an SLR film camera, I was unused to SLR digital cameras, and my point-and-shoot digital wouldn’t cut it. Hammer helped me to understand his SLR digital camera before I got on board a Red Baron Pizza Squadron biplane at the Albert Lea airport and flew all around the area, getting to experience barrel rolls, loops and other stomach-churning maneuvers. This photo of the squadron over downtown Albert Lea, taken June 30, 2006, won an award from the Associated Press. -- Tim Engstrom/Albert Lea Tribune

While Tribune photographers Brie Cohen or Adam Hammer did the bulk of the photography work over the past five years, Managing Editor Tim Engstrom took plenty of photos for the paper, too. He especially enjoys scenic photos but often was the photographer of the scene of breaking news.

Today, he shares his favorite images from 2006 to 2010. They are arranged in no particular order. In the captions, he tells how the photos came to be.