Falcons too much for Bulldogs in season finale 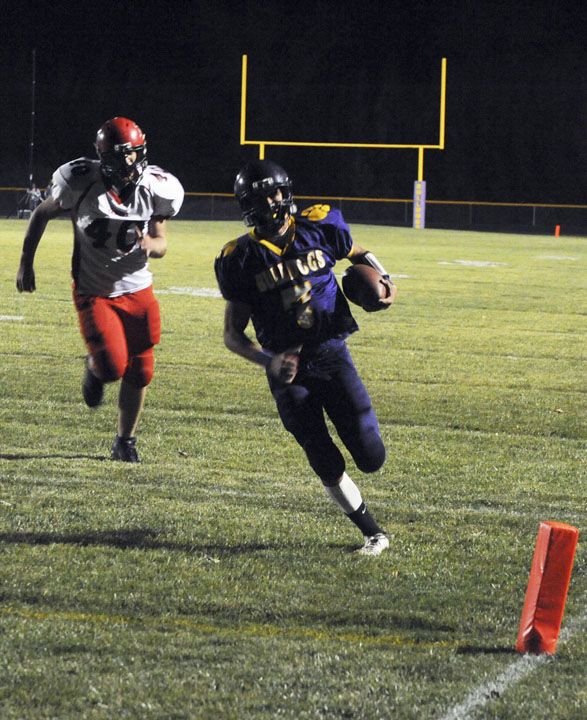 The No. 3 Falcons scored within the first 80 seconds for six of their 41 first half points, all part of a 52-14 rout of the Bulldogs in their season finale.

The Bulldogs kept the game close for much of the first quarter.

After touchdown runs by Brandon Simpkins and Jake Everts of 38 and three yards, respectively, the Bulldogs found themselves down 14-0 with no offensive momentum.

The Bulldogs punted or turned the ball over on their first three possessions but caught a break late in the first quarter after the Falcons fumbled the ball deep in Lake Mills territory.

The Bulldogs recovered the fumble and scored five players later off a Royce Byrnes run on second-and-goal at the seven-yard line.

Byrnes went untouched in the end zone and celebrated with teammates as the Bulldogs cut their deficit to 14-7.

On the ensuing drive, the Falcons moved the ball easily with runs of 18, 18 and 24 yards — part of 449 rushing on the night. A four-yard touchdown run by Dylan Bellows on first-and-goal put the Falcons up 20-7, but the Bulldogs responded again.

This time, Lake Mills didn’t need a turnover to move down the field.

Byrnes rushed for 19 yards on the second play of the drive setting up the Bulldogs with first down at their own 42-yard line. Three more positive rushing plays moved Lake Mills to first-and-10 at the Falcons’ 33-yard line.

After two incomplete passes and a three-yard run, the Bulldogs faced fourth-and-seven at the 30-yard line. Lake Mills opted to go for it and cashed in as Byrnes passed to Bryan Hengesteg for just shy of the end zone.

Hengesteg caught the ball with a defender at his back, turned and jumped across the goal line narrowing the Falcons lead to six points at 20-14.

That’s all the Bulldogs’ offense could muster, though, as the Falcons scored 32 unanswered points.