“Everything is nearly copacetic. Crying Charlie is on a two-week vacation to Iowa. He’s visiting celebrity chicken houses. While he is gone, I’m babysitting his parrot. The bird is named Echo and it’s driving me crazy.”

“It does. Crying Charlie taught it to say one sentence and it repeats it constantly.”

“Echo whistles, squawks and says, ‘Help, they’ve turned me into a parrot!’ I stopped at the Belching Bistro yesterday. Their food has always been terrible, but I think it has slipped a bit. I ordered cherry pie and coffee. The coffee was wet but the pie was terrible. You know me, I hate to complain unless I have something to complain about. I mentioned the pie problem to Sue Flay. I told her that it didn’t taste like cherry pie. Sue Flay filled my glass with cloudy water and snarled, ‘And just what does it taste like?’ I told her that it tasted like cardboard and paste.”

“She gave me that look that women always give me and said, ‘Oh, you must have gotten a slice of apple pie by mistake. The cherry pie tastes like soggy potato chips and soap.’”

Amy Wilms of Connersville, Ind., told me that she hadn’t been a birdwatcher at all before she decided to take it up as a hobby. Her first move was to buy binoculars. She bought the optics and stepped outside with her new purchase. She decided to try the new binoculars. The first bird she saw? A bald eagle.

We’re all in this together 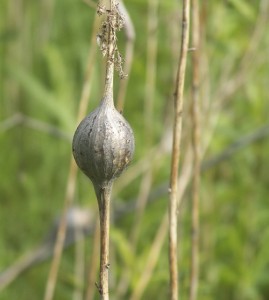 A goldenrod gall by Al Batt.

I watched the golfers. It was raining. They were on the first tee. I had been stumbling about in the mizzle before daybreak. I was looking for birds. The golfers were hoping for birdies and eagles. They likely thought I was crazy, and I might have questioned their sanity. It takes all kinds to make a world.

Burrowing owls live in prairie dog towns. When threatened, the owlets make sounds like a rattlesnake.

Dennis Ferraro, a herpetologist at the University of Nebraska at Lincoln, said that it is estimated that 75 percent of the 7,000 rattlesnake bites that occur in this country annually are dry bites — no venom. The venom is meant to be used for prey and is saved for that purpose whenever possible.

“I saw a large black bird in northern Minnesota—how do I tell if it’s a crow or a raven?” Ravens often fly in pairs while American crows often fly in larger groups. The tail of a raven in flight shows longer feathers in the middle that gives it a wedge shape. The tail feathers of crows are all nearer the same length and present a fan appearance. Crows caw and ravens produce a guttural, croaking sound.

“Do multi-colored Asian lady beetles bite?” They do bite. They also secrete a foul-smelling, yellowish fluid from their legs in a process called reflex bleeding. This liquid can stain light-colored surfaces. Some people go to Spain to run with the bulls. We can go outside and run with the mosquitoes, black flies, deerflies, no-see-ums and lady beetles.

Daddy longlegs are not spiders. Cellar spiders can be identified by the way they bounce on their webs. It is believed that this disorients a predator.

“The Seattle pro football team is nicknamed the Seahawks? What is a seahawk?” It could be either an osprey or a skua.

“Does the scat of a raccoon smell?” I must admit that I don’t believe I have ever smelled raccoon scat. It has never been on my list of things to do. I’ll bet that it does have an odor, but I’m not going to verify that belief. I recommend you do not smell raccoon scat — it could carry a dangerous parasite. Raccoon droppings are commonly infected with roundworm. Raccoon scat looks like that of a dog, but is generally smaller in diameter than dog droppings. Raccoon scat has blunt ends rather than pointed ends. The scat will also contain a variety of matter, including plant material, bones and fur. It will be found in prominent locations, such as at the base of trees, to serve as an announcement to other raccoons that “Rocky’s been here.”

Gallflies lay their eggs in the stem tips of goldenrod plants. Typically, only one egg survives. When the egg hatches, the larva burrows deeper into the stem. This activity stimulates the growth of a gall (a swelling of the plant tissue around the larva) on the stem. The gall, which can be as big as a golfball, provides food and shelter for the larva. Occasionally a species of wasp lays an egg in the gall. The wasp egg hatches and the larval wasp eats the gallfly larva. The cream-colored gallfly larva is eaten by downy woodpeckers and chickadees. Some ice fishermen have told me that the larva makes great bait. The adult fly emerges in the spring, leaving a small exit hole in the gall as evidence of its escape.

My father said that the height of the gall indicated the depth that snow would attain.

Take a child on a five-foot nature walk. To begin this backyard safari, measure five feet in your yard. Gather a pencil, notebook, magnifying glass and maybe a digital camera. Start exploring all the living things that make use of those five feet. Attempt to identify all you find. Most of nature goes unrecorded. That’s because most of nature goes unobserved. These five feet of your yard or of a park will become that child’s National Geographic or Discovery Channel.

“He that lives in hope danceth without music.” — George Herbert

“For in the true nature of things, if we rightly consider, every green tree is far more glorious than if it were made of gold and silver.” — Martin Luther