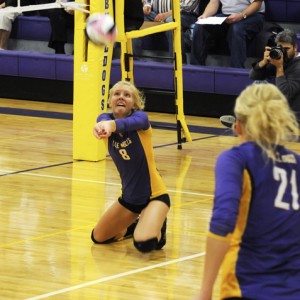 Fjelstad was also named unanimously to the All-NIC first team for the second consecutive year, along with the No. 6 Bulldogs’ Amanda Lampman, Josie Brackey and Lindy Pins. Abbey Honsey and Shelby Kuper were named All-NIC second team and honorable mention, respectively.

“She gets to many balls that most setters won’t be able to,” Boehmer said. “Her competitive spirit and aggressive style of play 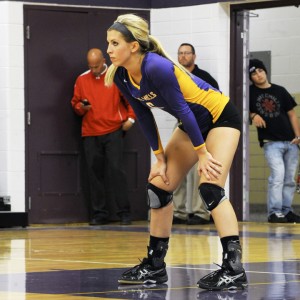 allows us to stay in system offensively or get back in system if we don’t have a good first contact.”

Fjelstad’s honor marks the third consecutive year the Bulldogs have had the NIC Player of the Year. It is also the sixth time that Lake Mills has had four players make the All-NIC first team, the most of any program in the conference.

Fjelstad has averaged 9.8 assists per game this season while serving 93 percent with just under one ace serves per game.

“I think with another year of offseason training and work, she could be one of the best in the state at her position,” Boehmer said.

The talented Bulldogs won their seventh consecutive NIC regular season championship this season in addition to winning the NIC tournament. They have also recorded the winningest season in school and are currently 42-1, two games shy of a state tournament berth.

Left side hitter Brackey led the Bulldogs with 3.3 kills per game and also had the best serving percentage at 95.

“Josie gets a lot out of herself,” Boehmer said. “She is not a tall left side hitter, but she jumps well and has a solid approach.”

Brackey is one of the more explosive, vocal players on the team.

“Her game knowledge and competitive attitude on the court has allowed us to speed up our offense considerably,” Boehmer said.

Lampman, a senior middle hitter, is a tall and powerful presence that leads the Bulldogs with 58 blocks.

She is also the team’s most improved player, according to Boehmer, filling the void left by last year’s NIC Player of the Year Darcy Nelson.

“Amanda has grown as a player as much in one year as I have had in my 19 seasons,” Boehmer said. “Having Amanda step up to fill in for what we lost in the middle is what allowed us to reload offensively.”

Lindy Pins, a senior middle hitter, missed the beginning of the season with an injury, and is as technical as any player Boehmer has coached.

“She is always focused on improving her technique,” said Boehmer, of Pins. “Lindy is not flashy, she just gets the job done.”

Along with Brackey, Pins is one of the best passers on the team and is fourth on the team with 134 kills.

“We worked hard to create a lineup and serve-receive pattern to get Lindy and Josie as many balls as possible,” Boehmer said. “This has allowed us to pass better and stay in system more.”