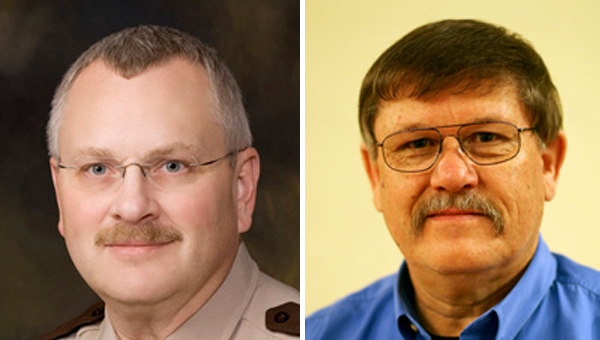 Staffing and shift changes leading to an alleged decline of morale in the Freeborn County Sheriff’s Office was one topic debated Thursday night between incumbent Sheriff Mark Harig and detective supervisor Bob Kindler, who are both vying for the sheriff’s seat in the Nov. 2 election.

“In the 23 years I’ve been with the department, morale is at all-time low. I’ve never seen it this way,” said Kindler.

He said this is in large part due to changes in scheduling.

“It’s destroyed family life,” he said. “Some of these changes could’ve been avoided if they had been looked at and planned better.”

Harig said he has an open-door policy for those in the department to talk with him at any time, and questioned why these issues with the schedule had never been brought forward to him. “These folks helped devise the schedule,” he said. “They have had opportunities to give input and they wanted a schedule a year at a time.”

Harig said that consistent changes have been made to tailor the department to focus on goals, becoming more efficient and economical for the budget.

“In the future, as we continue to enhance ICE to maximize our abilities, we may require different duties of people,” he said. “We continue to look at our entire budget every day to see what we can do better.”

Members of the public submitted their questions, which ranged in topics from staffing and budgets to equipment and what happens in the event of losing the election, shortly before the event started.

Tribune Managing Editor Tim Engstrom moderated the debate, which lasted about an hour and a half.

Kindler also said morale is declining because of perceived favoritism in the department.

Harig said he understands that people get disgruntled when passed over for promotions, but he has stayed off of hiring boards when it comes to promotions and hiring within the department.

“I’ve worked with a lot of these folks a long time, I know them, and it’s hard to choose one over another,” he said. “They’ve all worked hard and they all deserve it.”

Harig disagreed with splitting the detective supervisor position, as it breaks the team concept, the ability to rotate supervisors with the shifts and a new schedule would need to be created. Because of the grade shifts down in pay, the opportunity for patrolmen to advance would also be lost.

Harig agreed that overtime is difficult but it is manageable, and he’s worked to make reassignments in shifts and try to best accommodate everyone’s needs.

“I’ve not had a budget increase in three years, and been under budget in many line items,” said Harig.

He said in addition to that and adding in the ICE revenue, he’s continually looking at ways to save money. He said by switching healthcare providers, the department saved $130,000 and a switching from one vendor to another saved over $21,000 in a year.

“We’re working hard for that money,” he said. “There are no more ICE contracts being handed out in Minnesota.”