Memorial services for Frieda (Fritzie) Jensen, of Albert Lea, will be held at 2 p.m. Saturday at the First Lutheran Church in Albert Lea. The Rev. John Holt will officiate. Friends may visit with the family one hour prior to the service at the church. Interment will be in Hillcrest Cemetery. 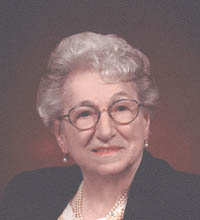 Frieda was born Oct. 25, 1914, in Kiester, the daughter of John F. and Maria B. (Lohner) Kleinschrodt. She attended public school and on June 27, 1936, she was united in marriage to Myrlin S. Jensen in Northwood, Iowa. Frieda was a member of the First Lutheran Church in Albert Lea since 1943 and was a Sunday school teacher. Before her marriage she had been employed by the Land-O-Lakes Co., and was a telephone operator in Lerdal and Conger. Together with her husband they owned and operated a grocery and liquor store on south Broadway for many years.

Frieda loved to spend time with her family and was an avid Minnesota Twins fan. She enjoyed card club, her bowling league, knitting and crocheting.