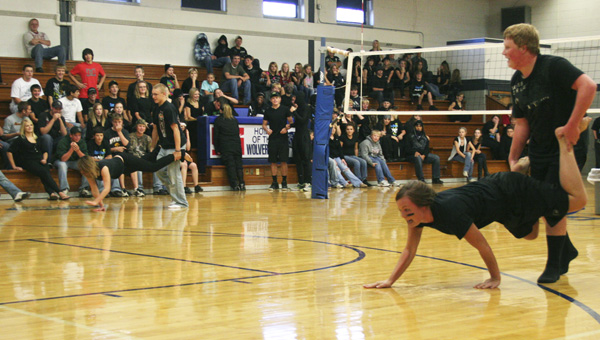 GLENVILLE — Students at Glenville-Emmons High School have been supporting sports teams and getting excited for tonight’s Homecoming football game.

The G-E Wolverines (2-3, 2-2 Southeast) will play the Mabel-Canton Cougars at 7 p.m. After the game there will be a Homecoming dance for highschoolers. Before the game family and friends are invited to a tailgating supper from 6 to 7:30 p.m. There will be sloppy joes, chips and bars and proceeds will go to the post-prom committee. 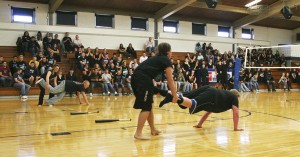 Students race each other while doing a variety of stunts Thursday at Glenville-Emmons High School. Each day the student council had planned various activities for Homecoming week to bolster school spirit. -- Kelli Lageson/Albert Lea Tribune

To amp up school spirit the student council has planned events for each day of the week. The events usually include different games, while today’s event will be the pep rally.

“It helps to get kids involved and get them to come to the game,” Devin Cooper said. Cooper is a senior and student council treasurer.

Thursday’s event was called the “Root Beer Chug-a-Lug.” A boy and a girl from each grade teamed up against the other grades to win the race. First, contestants had to chug a can of root beer and then bear-crawl to the other end of the gym. Then, they had to spin around five times and roll on a scooter back to the other end of the gym. Their partner then did the same thing. Lastly, each team did the wheelbarrow walk together across the gym and whoever finished first won.

Other events this week included beach volleyball, poster decorating for the Wolverines’ volleyball game against Houston and human foosball.

“There’s a point system for the games and the class with the most points gets their handprint on the wall,” Cooper said.

There are several handprints on the brick wall in the gym from past winners. Most of the students were wearing black clothes Thursday for the “Blackout” theme. Monday’s theme was “Mixed in a Blender,” Tuesday’s was “Formal/Hobo Day,” Wednesday was “Generation Day.” On Wednesday seventh- and eighth-graders dressed up like babies, freshmen dressed up as toddlers, sophomores dressed as rebels or school-worthy teenagers, juniors dressed as parents and seniors and staff dressed like senior citizens. Today will be school spirit day where students wear their school colors.