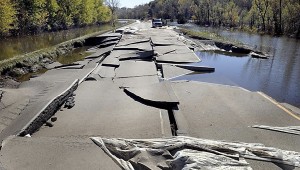 Minnesota Department of Transportation crews remove temporary levees, Monday, Oct. 4, 2010, near a 140-foot section of northbound Highway 169 near St. Peter, Minn. that was collapsed by the flooding Minnesota River last week. The major highway remains closed north of St. Peter as Mn/DOT works on an emergency contract to establish two-way traffic in the southbound lane and repair the washed-out roadway. -- AP Photo

Jim Swanson of the Minnesota Department of Transportation says the damage was revealed when the Minnesota River receded. He says some parts of the road washed away and the gap is 6 feet deep.

The department has received approval to have a contractor fix it immediately and work should be done in a week.

Swanson tells The Mankato Free Press that there was nothing wrong with the road before the water damaged it.

Bridge experts are also inspecting the Highway 99 bridge east of St. Peter. It will remain closed until the experts say it’s safe for travel. In Henderson, Highways 19 and 93 are closed.