Irwin Tukua, 91, was born on Dec. 2, 1918, in Freeborn County, to Arthur and Lillie (Strand) Tukua. In 1927, he moved with his parents to a farm near Fergus Falls where he attended rural school and was confirmed in Aastad Lutheran Church. He graduated from Fergus Falls High School in 1936. He continued his education at North Dakota State School of Science in Wahpeton, graduating from the two-year junior college course in electrical engineering. He began work in 1940 as a meter tester for Northwestern Public Service Company at Webster, becoming meter superintendent, electrical superintendent, and in 1970 the Webster Division manager. He retired in 1983. 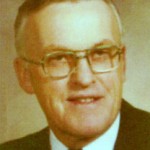 He was an active member of St. John’s Lutheran Church of Webster, being a long-time Sunday school teacher, Sunday school superintendent, 50-year member of the senior choir, member of the church council and president of the congregation. He was a member of the Webster Kiwanis Club, serving as local president and South Dakota Lt. Governor. He was secretary-treasurer of the Webster Development Corporation, director of the Chamber of Commerce, United Fund director, Bethesda Home director and board president and Bethesda Foundation director. He was a member of Izaak Walton League, American Legion and the Gideons. He enjoyed fishing, hunting, Twins baseball games, long drives in the country and spending time with his family.

He was preceded in death by his parents; siblings: Gladys Grotsun, Selma Bergerud, infant brother, Oliver, and Vernon Tukua.