It was purple day at Albert Lea High 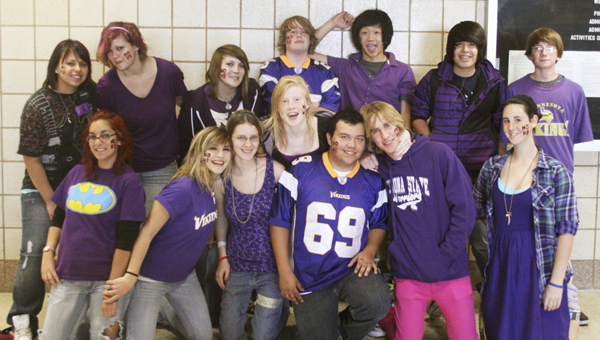 Students pose for a photo on Wednesday afternoon wearing purple to show their support for all students regardless of race, gender or sexual orientation. It also was to honor victims of anti-gay bullying. -- Kelli Lageson/Albert Lea Tribune

One student at Albert Lea High School helped organize other students to wear purple for Spirit Day on Wednesday.

Marley Cardona, 17 and a senior, started a group on Facebook when he first heard about Spirit Day. Oct. 20 was designated as Spirit Day to honor teens who have recently committed suicide after anti-gay bullying.

“I found out about the event on Facebook,” Cardona said. “We drew ‘NO H8’ on our faces.”

Cardona organized his own group on Facebook to spread the word that students could wear purple and paint their faces to support kids who are lesbian, gay, bisexual or transgender. He said he wanted any of these people to know there are other students who will support them.

“We want to show them that we stand up to any kind of bullying,” Cardona said.

Cardona said he was proud of his friends for showing their support and said none of it would have happened without their participation. He also said his family and teachers thought the event was a good idea.

The color purple was selected for the Wednesday event because it represents spirit on the rainbow flag, a symbol for LGBT pride, according to the Gay and Lesbian Alliance Against Defamation website.