The funeral service for Kenneth A. Hojberg, rural Ellendale, will be at 10:30 a.m. on Friday at First Lutheran Church, Ellendale. The Rev. Arne Halbakken will officiate. Interment will be in Geneva Cemetery. Military honors will be accorded by Ellendale Veteran’s Organizations. Visitation will be from 5 to 7 p.m. on Thursday at Bonnerup Funeral Service, Ellendale and one hour before the service at the church. 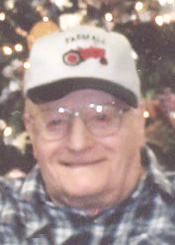 He was born on Jan. 14, 1921, in Albert Lea, the son of Pedar and Myrtle (Stoa) Hojberg. He attended country school in the Clarks Grove area and then began doing various jobs for area farmers. On Dec. 21, 1941, he married Gunhild Anderson at her parents home in rural Ellendale and they began farming in the Geneva area.

Kenneth served our country in the U.S. Army from April of 1945 until October of 1946, serving in Japan as a light truck driver. When he returned from the service he resumed farming, moving to his current farm on Highway 30 in rural Ellendale in 1959. In addition to farming he had also been a milk hauler for the Geneva Creamery and did custom harvesting in the area throughout his life.

Kenneth was a farmer at heart, he loved going on Sunday drives to check out the crops and machinery and read every farm magazine available. He enjoyed old time music, never missing Bandwagon and Lawrence Welk, and reading and sharing Ole and Lena jokes. Spending time with his grandchildren and great-grandchildren were special times for Kenneth.

He was preceded in death by his parents; his wife, Gunhild in 2000; daughter, Karen Johnson in 2002; great-granddaughter, Cheyenne Johnson; sister, Eleanor and her husband Ferris Peterson; brothers-in-law and sisters-in-law: Bergitthe and Leo MacFarland, Niels Anderson, Einer and Iva Anderson, Frank B. Anderson, Gunnar and Vi Anderson and Egel Anderson.

Kenneth was a quiet, humble man with a keen sense of humor. He will be fondly remembered for the glint in his eye and the smirk on his face that appeared when he snuck in one of his one-liners. Blessed be his memory.