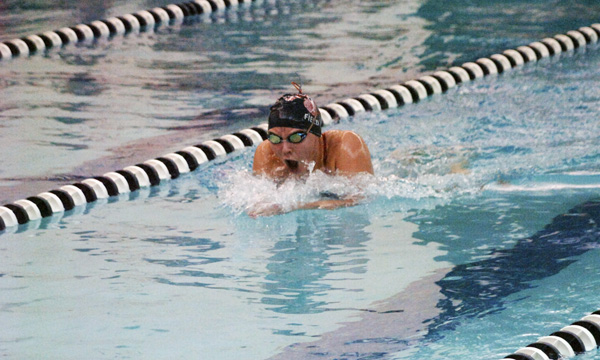 The Albert Lea swimming and diving team may have been outmatched by the Faribault Falcons, falling 94-87 Tuesday night, but there were some exciting moments.

“It was a real fun night,” Albert Lea assistant diving coach Jill Johnson said. “t was great to see Karli get the school record. We have been working on that all season.” Kriewall was excited about breaking the record “It felt really good,” she said. “It’s been my goal since the beginning of the season. The extra morning practices and weightlifting that Jon (Schmitz) set up have really benefited my diving.”

Johnson is very enthusiastic about the rest of the season and impressed with how her divers are doing.

“Brianna (See-Rockers) and Makenna (Friehl) have been working very hard. It’s going to be fun the rest of the season to watch.”

“Jill is an amazing coach and she has made us who we are,” Kriewall added.

“Jill is an amazing coach and she has made us who we are,” Kriewall added.

The swimmers had some of their own excitement.

The 200 free relay team of Galen Schulz, Lindsey Horejsi, Morgan Field and Amy Horejsi finished in a tie for first-place.

“It was very close, from beginning to end,” Horejsi said. “We were neck and neck all the way through. I swam last and when I touched the wall and I heard this big reaction from the crowd. I looked up (at the scoreboard) and saw both our lanes were in first-place. How often does that happen?”

Galen Schulz continued to show dominance in the 50 and 100 freestyle with first-place finishes in both events.

The Tigers were outmatched in the other events bringing home many second-place finishes.

“We will be doing a lot of training for our three meets next week,” Amy Horejsi said.