LaVerne Kenneth Johnson, 87, of Wells, died Monday, Oct. 25, 2010, at Parkview Care Center in Wells. Funeral services will be Saturday at 11 a.m. at United Methodist Church in Wells. Visitation will be one hour prior to the services at the church. The Rev. Paul Woolverton and the Rev. Victor Vriesen will officiate and burial will be in Rosehill Cemetery in Wells. Military Honors will be accorded by the Wells Color Guard. Bruss-Heitner Funeral Home in Wells is in charge of arrangements. 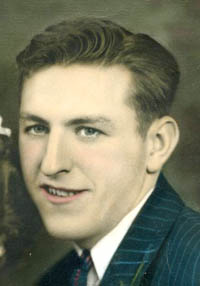 LaVerne was born Feb. 1, 1923, the son of Andrew A. Johnson and Ida (Dewinter) Johnson on the Baroda Farm in Wells. LaVerne graduated from Blue Earth High School where he was an honor student. He served in the Army during WWII. On Jan. 29, 1944, he was united in marriage to Carmen Hamson in Fairmont. LaVerne was a farmer and he worked at Mallons and Nordaas Homes. He loved all different types of sports.

He was preceded in death by his parents; parents-in-law; wife, Carmen; four brothers and seven sisters; and son-in-law, John Hubbard.