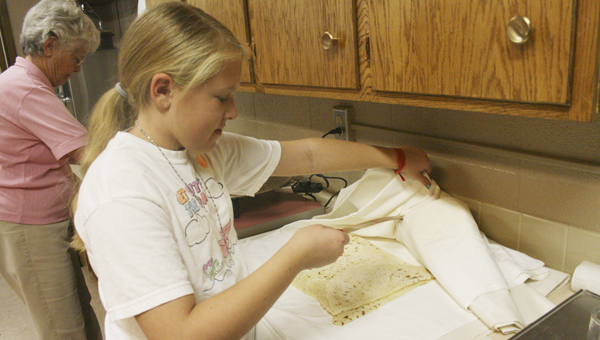 Liana Schallock shows off freshly fried lefse, made with the help of her grandmother, Alice Jensen. -- Michelle Haacke/Albert Lea Tribune

The aroma of freshly fried lefse wafted through Ascension Lutheran Church of Albert Lea Thursday morning as women, girls and even a couple of men shared in their annual tradition.

About 20 members of the congregation were busy mixing, rolling and frying the Norwegian delicacy in preparation of the Time and Talent Bazaar on Nov. 6. 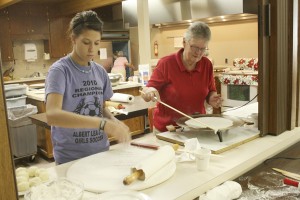 Lefse is a traditional soft Norwegian flatbread, which can be eaten as a dessert or stuffed with vegetables for a main meal, and one of the main attractions of their bazaar.

“Most people eat these as a dessert with butter and sugar or brown sugar, but true Norwegians eat it with lutefisk, mashed potatoes, vegetables and butter,” said Jayne Williamschen.

Alice Jensen said these volunteers made about 58 dozen lefse last week, and on Thursday, she expected they would fry up 50 dozen more for the bazaar.

She said they mixed this batch on Wednesday, peeling, cooking, “ricing” and mixing 100 pounds of potatoes.

The assembly productions began Thursday morning with Kristin Sandager, a sophomore at Albert Lea High School, who was mixing the dough with flour and then rolling it into little balls.

“When I was little, my mom and sister use to help, and I’d come along,” she said. After taking a few years off, she was glad she was able to help on Thursday in carrying on this tradition. 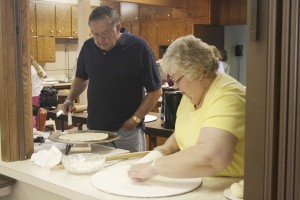 Sandager and her crew nearly couldn’t keep up with about eight other pairs of people rolling, frying and flipping lefse in the church kitchen.

Williamschen and her granddaughter Kelsey Schrieber were one of these teams. “Kelsey’s our fourth generation to use these,” Williamschen smiled. “These were my mom’s tools, and someday, they’ll be hers.”

Schrieber rolled out the dough with a special rolling pin — one that’s larger than the standard size. It was engraved with grooves and covered in cheesecloth.

As soon as the tortilla-sized patty was rolled, Williamschen snatched it up with a flat wooden stick — the flipper — and tossed it onto a round griddle. She fried each lefse for 30 seconds per side before removing to cool in a soft cloth.

After it was cooled, the lefse was packaged in plastic wrap for the bazaar.

Schrieber, who’s also a high school student, has been making lefse for five years. She said she’s the only one out of all her friends to practice this tradition. “It’s just fun,” she said. “I like helping out.” 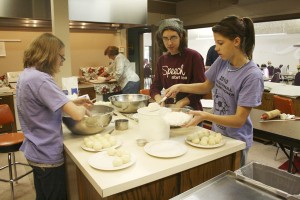 About 20 volunteers made lefse at Ascension Lutheran Church Thursday for their annual bazaar on Nov. 6. -- Michelle Haacke/Albert Lea Tribune

Jensen has been a part of this mass production of lefse for many years, and was rolling out balls of dough and handing them to her granddaughter, Liana Schallock, to fry on the griddle.

Schallock, a sixth-grader at Sibley Elementary School in Albert Lea, said she likes making and eating lefse while learning this Norwegian tradition from her grandmother. Her favorite part is flipping it on the griddle.

“It’s fun to watch it shrink,” she grinned.

While the room was dominated by women, a few men were frying up lefse, as well. Ray Riemer said he was just following his wife, Julie.

“I didn’t grow up with lefse. I’m of German heritage,” she said.

A good friend of Norwegian heritage, who Riemer said was an expert on lefse making, got her involved in the tradition shortly after retiring over 20 years ago.

“I just enjoyed it!” Riemer smiled.

The lefse will be available for purchase at the Time and Talent Bazaar, scheduled from 8 a.m. to 1 p.m. Nov. 6 at Ascension Lutheran Church, 1101 Highway 69 S., Albert Lea.