Funeral services for Leroy Koester, 86, of Albert Lea will be held on Thursday, Oct. 14, 2010, at 11 a.m. at Bayview/Freeborn Funeral Home. The Rev. Deb Miller will officiate. Burial will be at Graceland Cemetery with Military Honor’s accorded by the Freeborn County Veteran’s Organization and the Kiester Legion. Vistation will be Wednesday from 5 to 7 p.m. at Bayview/Freeborn Funeral Home and one hour prior to the services at the funeral home. To sign the guestbook go to: www.bayviewfuneral.com. 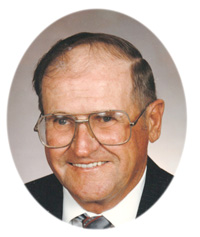 Leroy died on Saturday, Oct. 9, 2010, at Thorne Crest Retirement Center with his family at his side.

Leroy Koester was born on Feb. 10, 1924, in Crawford County, Iowa the son of Louie and Leona (Ranniger) Koester. He attended school in Iowa and at District 75. On March 3, 1945, Leroy was united in marriage to Mildred Sistek at the Methodist parsonage in Albert Lea. Leroy served his country during World War II in the US Army. He was a farmer and worked for the Mansfield Store as a truck driver and all around handyman. Leroy was a member of Grace United Methodist Church and the Kiester Legion.

Leroy was preceded in death by his parents; his in-laws: Fred and Anna Sistek; one son in infancy; brother, Lloyd and wife Eileen Koester; sister, Leone Loomis; and brothers-in-law: Freddie and Richard Sistek.