Funeral services for Lewis Cunningham, 89, of Albert Lea will be held at 10:30 a.m. Thursday at Bayview/Freeborn Funeral Home. The Rev. Milton Ost will officiate. Interment will be at Graceland Cemetery. Military honors will be accorded by local servicemen’s organizations. Visitation will be from 5 to 7 p.m. Wednesday at Bayview/Freeborn Funeral Home and one hour prior to the service. To sign the guest book, go to www.bayviewfuneral.com. 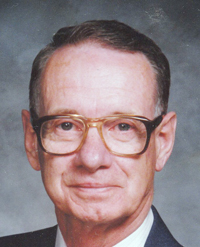 Lewis died peacefully Saturday, Oct. 23, 2010, at his home surrounded by the love of his family.

Lewis was born Jan. 12, 1921, to Jesse and Illene Vera (Nash) Cunningham in Glenville. He grew up in Glenville and attended school there. Lewis was drafted into the U.S. Army where he served in the medical corps. in Europe. On July 7, 1943, he was united in marriage to Gladys Mostrom in Albert Lea. Lewis was a member of Grace Lutheran Church, American Legion and VFW. He enjoyed volunteering for the Eagles 5th District Cancer Telethon Geneva Auction. Lewis enjoyed fishing, reading, going to rummage sales, carnivals and circuses, and most of all he loved spending time with his children, grandchildren, great-grandchildren and his pets.

Lewis was preceded in death by his wife, Gladys; parents, Jesse and Illene; mother and father-in-law, Arthur and Sarah Mostrom; grandchild, Jon Wacholz; and several brothers and sisters-in-law.

Lewis will be greatly missed by his family.