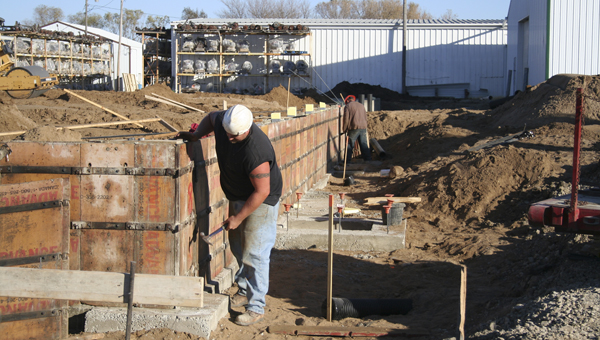 Work has begun on the foundation of what will be the fifth building at Albert Lea’s LKQ site. With all the dry weather in October, construction is expected to be completed by the end of December. -- Kelli Lageson/Albert Lea Tribune

LKQ Auto Salvage in Albert Lea will soon have another building to aid with the large amount of distribution the company does.

“The building will be used for parts storage and distribution,” Grobe said. 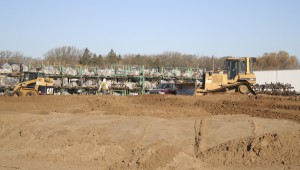 Dirt was being moved on Friday at the site of the new LKQ distribution building. The building will be 24,000 square feet with 40-foot side walls. -- Kelli Lageson/Albert Lea Tribune

The new building will be 24,000 square feet with 40-foot side walls, which is double the size of one of the four current buildings. LKQ is located about a mile east of Interstate 35 on County Road 46 at 21647 785th Ave. On Sept. 23, Freeborn County issued a building permit to LKQ Minnesota for a commercial building with a valuation of $900,000.

The target date to finish the building is Dec. 23. Grobe said the construction crews have been glad to see no rain in October, which would have hindered their progress. The general contractor for the building is Keller Construction of Madison, Wis. Grobe said other than the general contractor, local companies are working on the new building. Freeborn Construction was hired for the excavation work and Jensen Electric and Jim & Dude’s were also hired to help with the building.

There are boxes with various auto parts overflowing the current warehouse. Grobe said that because of the amount of distribution of auto parts that the new building is needed. Because there are 300 sites owned by LKQ in the United States, auto parts are shipped to and from whichever site needs or has a specific part. If a customer in Albert Lea requests a part, it can be shipped to Albert Lea’s site very quickly, Grobe said.

LKQ has headquarters in Chicago, Ill., and has 10,000 employees, 26 of which are in Albert Lea. Grobe said cars are usually bought at salvage auctions then dismantled. The parts are then separated, bagged, boxed and stored in their warehouse. The process is also electronic so that the auto parts in storage are in a database for the entire company.

He said that LKQ’s customers are usually body shops or just people from around the area who work on cars. Grobe said the new warehouse will have an automated system, which will make storing and retrieving parts easier.

“It’ll be nice when it’s done,” Grobe said. “We’ve been very fortunate that the company’s making the investment.”