Llewellyn “Louie” Hintz, 72, of Kiester, died Monday, Oct. 25, 2010, at his home in Kiester surrounded by his family. Funeral services will be Thursday at 10:30 a.m. at Our Savior’s Lutheran Church in Kiester. Visitation will be Wednesday from 5 to 8 p.m. at Grace United Methodist Church in Kiester and one hour prior to the services at Our Savior’s Lutheran Church on Thursday. Rev. Cherie Daniel will officiate and burial will be in Fairview Cemetery, rural Kiester. Bruss-Heitner Funeral Home in Wells is in charge of arrangements. Louie was born July 14, 1938, the son of Walter and Margaret (Buendorf) Hintz in Kiester. On Oct. 22, 1957, he was united in marriage to Edith Courrier at Rice Lake. 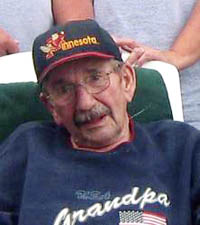 Louie graduated from Kiester High School where he played football and basketball and was Homecoming king. He farmed until 1966 at which time he moved into Kiester and worked for Co-op Elevator. After his retirement in 2002, he drove school bus for USC. Louie was a fireman for 20-plus years and served as chief for several years. He enjoyed woodworking, following the Vikings, Twins, Gophers, and fishing — especially the fall trip with the guys. Louie was an active member of Grace United Methodist Church for over 50 years.

He was preceded in death by his parents; parents-in-law and two brothers-in-law.