The Funeral Service for Lucille “Lucy” M. (Harkner) Pagel, of Albert Lea, will be held at 11 a.m. on Wednesday at St. Theodore Catholic Church. Deacon Mike Ellis will officiate. Interment will be in Hillcrest Cemetery. Visitation will be from 5 to 7 p.m. Tuesday at Bonnerup Funeral Service, Albert Lea, and one hour before the service at the church. 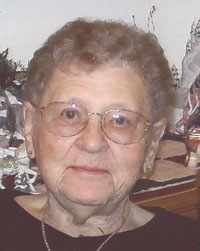 She grew up on a farm in the Wells area and attended rural school. Lucy married Perry M. Peterson and in 1942 they made their home in Albert Lea. They were later divorced. She married Leslay Harkner and they shared 25 years together before he died. In 1977 she married Wilbert “Bill” Pagel, he preceded Lucy in death in 2006, after 28 years of marriage. She was a member of St. Theodore Catholic Church, the American Legion and the V.F.W.

Lucy loved making a home for her family. She enjoyed baking, especially breads, pies and cookies. She always had a huge garden and spent much time canning vegetables and tending to her flowers. She enjoyed dancing and camping, but mostly she treasured having her family around her.

She was preceded in death by her parents; her brother, Raymond Hautt; her husbands: Leslay Harkner and Bill Pagel; her son, Eugene Peterson; her daughter, Kathy Sickels; son-in-law, Raymond Dean Sickels; and her grandson Dale Sickels.