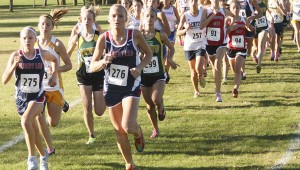 “I’ve been waiting for this day since July,” Albert Lea head coach Jim Haney said after the race. “We finally had all runners running at full strength. It has been such a long time since Albert Lea has performed so well in a big meet.”

Monson, who ran in her first varsity race since suffering stress fractures in both her legs, finished fifth overall in 15 minutes and 29.5 seconds, followed closely by Thompson in 15:32.6.

“Monson and Thompson worked well together and proved that they will be a force in the Big Nine and the section meets,” Haney said. “Thompson was right with (Monson) stride for stride and they are a great 1-2 punch. These girls had an outstanding day as well as all my girls did.”

Monson finished less than eight seconds behind the second-place finisher and 30 seconds out of first place.

“Monson exceeded my expectations,” Haney said. “She ran hungry and with so much desire to return to her track and cross country form from last year.”

The boys’ team finished in 10th place and were led by Steven Kruen and Blair Bonnerup.

“The boys had a great effort,” Haney said. “They are running to their ability and were able to beat three teams, two from the Big Nine.”

The Tigers finished ahead of Winona and Faribault and their top five was rounded out by Andy Christian, Luc Malimanek and Eli Malimanek.

“It was one of the better days for Albert Lea cross country in some time,” Haney said of the overall meet.

The Tigers cross country team is in action again Tuesday at Austin.