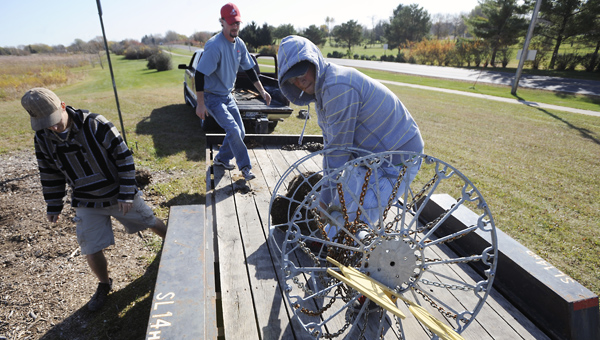 At Bancroft Bay Park on Saturday, Nick Flores lifts the old basket for Hole 10 onto a trailer rented at no charge from Western Rentals. To the left is Derreck Walk and at center is Art Schorn. They loaded the trailer with baskets and hauled them to Riverland Community College’s campus in Albert Lea. -- Andrew Dyrdal/Albert Lea Tribune

The Flying Lea Disc Golf Club worked hard Saturday prepping for the installation of new Chainstar baskets at the Bancroft Bay Disc Golf Course in Albert Lea and transplanting the old baskets at a new course at Riverland Community College.

According to a the club, the plan was to create a new course and improve another.

“Our club’s mission is to further the sport of disc golf in the Albert Lea area,” Flying Lea coordinator Tim Engstrom said. “We couldn’t achieve our mission without the great support we receive from the community.”

Bancroft Bay Park now has new Chainstar baskets, which cost $6,100 after taxes and are made by Discraft in Michigan. Of that, $5,000 was paid through a grant from the Statewide Health Improvement Program. The club received the grant through the help of Freeborn County SHIP coordinator Ellen Kehr working in coordination mainly with Flying Lea board member Jeshua Erickson.

The rest of the expense was paid for with $850 from the Flying Lea Disc Golf Club and $250 from the Minnesota Frisbee Association.

“Disc golf is a great sport for getting people — especially young people — to exercise on a regular basis,” Kehr said. “And having a course at the campus provides a PE facility for the high school, the college and the community as a whole.”

The new course at Riverland, Schorn said, is meant to be easy enough for beginners but with enough challenge to satisfy all skill levels. Sixteen baskets are on Riverland property and two are on Albert Lea School District property. The course is part of the Albert Lea Parks and Recreation Department, via a college-city agreement.

Erickson and Kehr noted that the effort is quite remarkable, compared to most projects, in that it required the collaboration of so many entities: city, college, school district, county, state and disc golfers.

The old baskets have sharp edges that chip discs and are in need of some repairs. The hope, Erickson said, is that Riverland students who work with metals can disassemble the baskets, fix them, then reassemble them.

Engstrom, managing editor of the Albert Lea Tribune, said work shows the community the Flying Lea Disc Golf Club is a legitimate group with the strength to raise funds and volunteers. About 15 disc golfers did installation work Saturday. Only four were needed Sunday. His idea for the Riverland course came as recently as April.

“Who says young people aren’t community-minded? These are mostly young guys working their tail off and showing they care about Albert Lea,” he said.

Schorn said the club’s next goal — which, without grant funding, would take about two years — is to install concrete tee pads at the Riverland course.

About the Flying Lea Disc Golf Club
Name: Flying Lea is taken from Green Lea Golf Course. Because the discs fly and because the name resembles “flying leap,” Flying Lea was selected.
Members: About 80 people paid the $5 dues to become a club member this season.
Fundraising: The club actually had raised $2,500 by the time it applied for the SHIP grant in mid-summer. Some went to the basket purchase; some to installation expenses (such as feeding the volunteers); some to tournament and points prizes, and some the club has for its next goal.
Sponsors: The club members gave their dollars and dimes at each event; however, many sponsors helped the club this season, too. They were Nancy VanderWaerdt State Farm Insurance, Monster Energy Drink via Krieger Beverage, Security Bank Minnesota, Albert Lea Medical Center, Albert Lea Dental Clinic, Innovance (Lou-Rich), Martin’s Cycling & Fitness, Lions Club, Ad-Art, Western Rentals and Raleigh’s Ace Hardware.