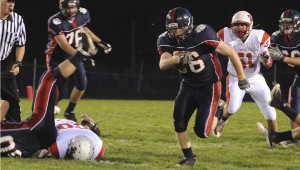 The Albert Lea Tigers forced four turnovers and outscored No. 2 Mankato West 7-0 in the second half Friday, but a 36 point halftime deficit was too much to overcome as the Tigers fell 36-7 at Hammer Field.

In the first half, the Scarlets (6-0, 5-0 Big Nine) looked well on their way to a blowing out the Tigers (1-5, 0-5) at Homecoming, and recording their third straight shutout.

After stopping the Tigers on third-and-nine at their own 42-yard line, West cruised on their opening drive, moving the ball from their three-yard line into Tigers’ territory on three consecutive first downs.

On second-and-eight at the Tigers’ 22, Scarlets quarterback Philip Nelson threw a pass that was tipped and intercepted by Albert Lea’s Silas Randall at the six-yard line.

The interception halted a Scarlets offensive drive that steamrolled the Tigers for 75 yards, but gave Albert Lea terrible field position against a defense that went into Friday allowing two points per game.

After going four and out, a short punt and facemask penalty gave Mankato West starting field position at Albert Lea’s 19-yard line. The Scarlets needed only one play to score — a 19-yard run by Nelson — and go ahead 8-0.

That started a pattern in the first half that the Scarlets kept on repeating.

Two more short drives by the Tigers and two more scores for the Scarlets put West ahead 20-0 just seconds into the second quarter.

The Scarlets looked like they were about to score again on their next drive but Chris Stahl intercepted Nelson — his second of three thrown on the night — at Albert Lea’s 26-yard line.

Nelson tacked on another touchdown – a 22-yard rush — just before half to put West ahead 36-0 going into the locker room.

Anderson said he was disappointed with the Tigers performance in the first half, noting their inability to tackle or move the football offensively. But Albert Lea made some defensive adjustments in the second half in order to stop West’s running game, and held Nelson and the Scarlets offense scoreless for the remainder of the game.

Early in the third quarter, Stahl intercepted Nelson for a second time as the Scarlets had second-and-10 at Albert Lea’s 11-yard line, ending one of only two threatening drives in the second half.

“(Defensive coordinator) Jerry Bizjak did a great job,” said Anderson of the second half adjustments. “(West) was just hurting us so much with the run that we decided to go back to our 3-4 defense and that really made a difference. A great adjustment by coach and I think our guys gained confidence as the half went along.”

The Tigers broke up the shutout late in the fourth quarter, as Kriewall found Aaron Klatt for a 31-yard reception, and Ethan Abben rushed four times for 27 yards and a touchdown on their second-to-final drive.

The Tigers’ seven points were the second most scored against West all season, and the most in nearly a month as the Scarlets surrendered two points combined in their prior three games against Faribault, Winona and Austin.

“We knew this stretch we knew was going to be tough,” Anderson said of his team’s past two games and upcoming game at Rochester Mayo. “When you lose five in a row, I’ve seen a lot of teams that would hang their heads and look for the winter. But our kids are practicing hard everyday, they’re enjoying football and we’ve only got some brighter spots ahead.”