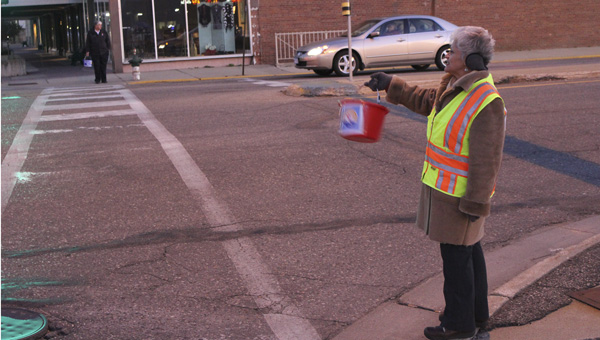 Linda Lares shakes her bucket to get the attention of automobile drivers passing by the junction of Broadway Avenue and Main Street in downtown Albert Lea this morning. The traffic was slow-going at 7 a.m. but picked up by 8 a.m. -- Tim Engstrom/Albert Lea Tribune

Locals were braving a chilly morning in Albert Lea this morning to drum up support for a different kind of campaign.

Volunteers in yellow vests kept moving to stay warm in 35-degree temps, swinging small buckets and waving to drivers at the corner of Broadway Avenue and Main Street, in an effort to raise funds for United Way’s annual Keep the Fires Burning campaign.

Except there was no fire.

“We aren’t doing the actual fires this year because of the new location,” said Ann Austin, executive director of the United Way of Freeborn County. “We are doing a figurative fire this year with the sign.”

In the past, the local chapter has embraced this symbolism by burning an actual fire, adding wood to keep the fire burning as donations are collected. This year, however, there were no actual fires at the site.

“The symbolism of the fire is that in a person’s darkest hour, whatever their need is — physical, emotional, etc. — United Way provides a light for them to guide them through,” said Austin. 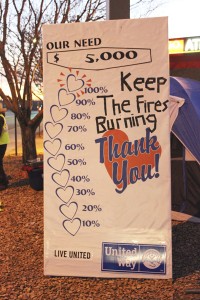 A sign was erected in place of actual fires at this year’s Keep the Fires Burning United Way fundraiser this morning. Organizers will color in the hearts as they near their $5,000 goal. -- Tim Engstrom/Albert Lea Tribune

The money raised at this event, which started at 7 a.m. today, will go toward’s the Live United campaign goal.

Keep the Fires Burning continues until 5 p.m. today at the intersection of Broadway Avenue and Main Street in Albert Lea.

“This is unusual. By now, we usually have a few coins, bills and even a check or two,” said Linda Lares of Semcac Community Action Agency.

She said the sun not yet shining probably had a lot to do with that, and expected things to pick up as traffic increased for the morning commute to work.

Capt. Jim Brickson of the Salvation Army wasn’t worried about the slow start.

“It always picks up as the day goes on,” he said.

He felt it was necessary to be at the event because as a partner agency, money raised at Keep the Fires Burning directly impacts programs and people he works with. He said funds will specifically help the local food pantry and after school programs in Albert Lea.

According to Austin, United Way funds 31 programs essential for the well-being of the community. She said these programs benefit community members of all ages and focus primarily on education, income and health.

“To build a healthier community, need to look at the whole picture,” she said.

This is the fifth year that Freeborn County United Way has participated in the Keep the Fires Burning event.

More than 30 volunteers were scheduled to help at the event throughout the day.

KATE Radio was also on hand, talking to agency partners on the air throughout the day.

“We have so many families in need of support,” Lares said. “This is just part of what we do. We pull together as a community.”

Austin credited several local businesses and community partners for donating products or services to make this event possible, including Wells Fargo, the City of Albert Lea, the Family Y, the Minnesota Department of Transportation, KATE Radio, Power 96 and the Albert Lea Tribune.

Potato bar fundraiser
Thorne Crest Retirement Community is hosting a potato bar fundraiser to benefit United Way on Nov. 2 from 10 a.m. to 1 p.m. Enjoy a potato bar with all the fixings, including chili, cheese, salsa, bacon and onions, along with dessert and beverages. Donations will be taken at the door and all proceeds will benefit Freeborn County United Way. The community is invited to attend this annual event. Thorne Crest Retirement Community is located at 1201 Garfield Ave., Albert Lea.

Fountain Warehouse Liquor is hosting a wine tasting at Wedgewood Cove Golf Club at 5:30 p.m. on Nov. 5. The event will also feature a silent auction, with all proceeds benefiting Freeborn County United Way.