Funeral services will be Wednesday at 10:30 a.m. at Emmons Lutheran Church with the Rev. Julie Fiske officiating with military honors conducted by Emmons Louis/Tviete Post 317. Visitation is today from 4 to 7 p.m. at Mittelstadt Funeral Home in Lake Mills, Iowa. 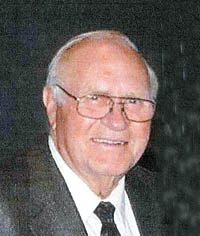 Orlo Dean Twito was born on March 13, 1928, north of Lake Mills in Winnebago County, Iowa, the son of Mikal and Gilma (Helgeson) Twito. He was baptized and confirmed at Lime Creek Church, rural Emmons. Dean attended the Helgeson Country School through the eigth grade in rural Norway Township, Lake Mills Community High School through half of his junior year and then graduated from Emmons Public School when his parents sold the farm and moved to Emmons to start a new occupation. At that time, the family became members of Emmons Lutheran Church.

After graduation, Dean enlisted in the United States Army where he served from 1946 to 1948, stationed in Japan after the end of World War II.

After serving in the Army, Dean joined his father Mike in operating several businesses but is most remembered for the Gambles Store. In 1949, father and son obtained sales positions in Pioneer International where Dean remained as a dealer for 41 years.

On July 28, 1965, Dean was united in marriage to Ramona Grotewold. A year after their marriage, Dean and Ramona purchased a farm south of Emmons on the Iowa side where Dean started farming again along with continuing his successful salesman career with Pioneer. They raised their two children, Gretchen and Mick, on this farm before selling their acreage in 2006 and building a new home together at 205 North Oak, Lake Mills.

Dean was always an ambitious and capable man who worked hard to provide for his family. He had a positive outlook on things and he was a kind, friendly and thoughtful man. Dean cherished his relationships with his friends and loved his family. During these past five weeks, Dean was very thankful for the Hospice team’s assistance, his minister, friends and family. He welcomed the frequent visits, those who wrote notes, sent flowers, brought food and called, read scripture and prayed with Dean, helping him celebrate the last days of his life.

Dean most recently spent hours in his yard and vegetable garden, having coffee with friends and playing cards. He and Ramona enjoyed traveling the U.S, Mexico, Norway and Canada and spent winters in Texas, Florida, California and Arizona following son Mick on his career destinations. In earlier years, Dean played a lot of baseball, bowled, golfed, hunted, fished, dabbled in woodworking and peddled fruits and vegetables for fun. Dean rarely missed an athletic event or activity for his children or grandsons and was a supportive Bulldog fan.

He proceeded in death by his parents; brother, Don; brother-in-law, Don Graham; a niece, Dawn; and an infant nephew.