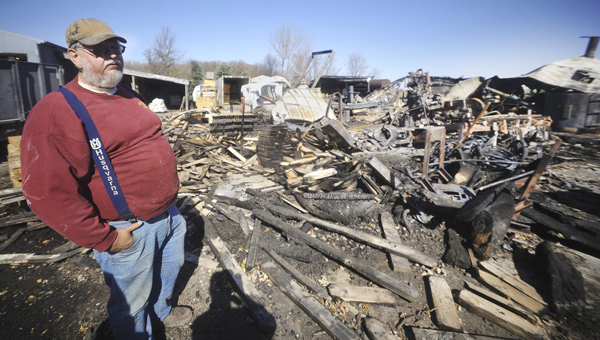 Len Meyer, owner of Len’s Wood Products north of Oakland, looks over the burned wreckage of his sawmill Thursday afternoon. The cause of the Wednesday’s fire that destroyed his sawmill has been classified as undetermined. -- Eric Johnson/Albert Lea Tribune

OAKLAND — Twenty-four hours after a fire destroyed his sawmill and hundreds of logs nearby, Len’s Wood Products owner Len Meyer on Thursday was trying to grasp the extent of damages to his business and how he will move forward.

“I don’t even know if it has hit me yet,” Meyer said Thursday afternoon. “Until they put all the numbers together, it won’t really sink in.”

On Wednesday, his sawmill shed, at 22726 890th Ave. just north of Oakland, caught fire and spread in heavy wind to large piles of logs and cut lumber.

Investigator Doug Johnson with the Freeborn County Fire Investigation Team, said after additional investigation Thursday, the cause of the fire is officially undetermined. There are too many variables in the case that have made it difficult to narrow down to one cause, he noted. There are no suspicions of arson. 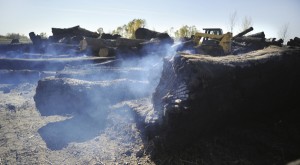 Logs at Len’s Wood Product still smolder as they are sorted Thursday, a day after the business was ravaged by massive fire. -- Eric Johnson/Albert Lea Tribune

He estimated Wednesday night damages of at least $500,000.

Johnson said the blaze appears to have started in the southwest area of the sawmill building.

Meyer said two of his employees were in the shop at the time the fire started, and he was inside filling out invoices when smoke came billowing out of the sawmill.

More than a dozen fire departments responded to battle the blaze over a period of three to four hours, and there have since been several flare-ups.

In business since 1993, Meyer said he sustained a total loss of the sawmill building itself and the sawmill equipment. Two buildings outside of that need major repairs, and a 48-foot semitrailer that had been used for storage is also completely destroyed.

The Meyers’ home and barn, just feet in front of the blaze, did not appear to sustain any damages.

His property Thursday afternoon was filled with areas of deep mud from all of the water sprayed by the firefighters.

Meyer said he did not yet know an estimate for the damages, though he noted he was planning to meet with an insurance adjuster that afternoon.

He noted he wanted to see what the insurance adjuster had to report and then discuss options of rebuilding.

The business specializes in making pallets and crating and even sells firewood, among other specialties. It has five employees.

Meyer said the employees will help with the cleanup.

He thanked the people who have assisted him and his family since the incident Wednesday.

Many of his customers also have already called after seeing the story of the fire on the TV and in the newspaper.

He said the fires have flared up a couple of times since firefighters packed up Wednesday night. He has since called the fire department again to respond.